I Hope You're Happy Now

Andrew Bujalski, who wrote 'Funny Ha Ha' in Austin and wrapped it in Boston, on the film's unlikely fate 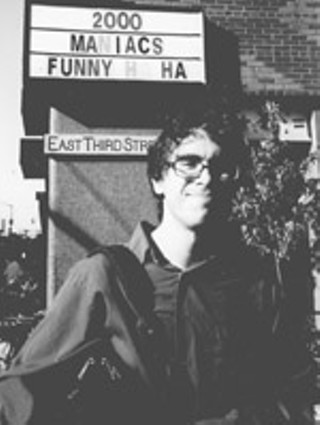 Andrew Bujalski thinks this is the beginning of the end for Funny Ha Ha. And you might be excused for thinking him excessively gloomy when distribution to art houses around the country is the least that so many first-time filmmakers hope for, and more than so many get. But modesty is one of the things people like about him – and his debut feature. Then again, from his angle, it's been a long, meandering trip since he first wrote the script in Austin in 2000, finished the film in Boston in the spring of 2002, and followed its surprising peregrinations ever since.

"The thing has succeeded beyond my wildest dreams on every level," he says, "except maybe financially, and even there, it's done about as well as one could reasonably hope for, given the circumstances." The circumstances are that Bujalski's not the star of a successful TV show; the lead, Kate Dollenmayer, did not lose or gain 60 lbs. for the role or swim with live sharks; it was shot and cut on 16mm film, with hand-written titles and without benefit of a manifesto; and its quirky-costume-and-catch-phrase-free story of one uncertain twentysomething's misadventures with various boys doesn't involve the shocking third-act revelation that she and her misguided romantic prospects are actually facets of a single, fractured personality. The biggest gimmick might be that there is no gimmick: a distinctive personal statement rather than a personality-centered marketing blitz, it's the sort of thing that used to be known as an independent film.

But armed with raves from The New York Times and The Village Voice, among others, and perhaps more importantly, a growing cult following, Funny Ha Ha might yet exceed some financial dreams, no mean feat in a contemporary market strewn with the corpses of micro-budget festival hits that could scarcely make back their distributors' expenses in publicity and advertising. That its P&A expeditures are miniscule compared with current standards helps the bottom line, but only if the film can get by on its charms. Good thing those charms are considerable.

So, though it never played at any of the standard roster of "big" festivals (Sundance, Toronto, Telluride), it did pick up fans and awards. During the early days collecting festival rejections, notables like the legendary Yugoslavian director Dusan Makaveyev (W.R.: Mysteries of the Organism) and cinema scholar Ray Carney (Cassavetes on Cassavetes) weighed in with kind words for the film, and enthusiastic audiences in Boston encouraged Bujalski to keep at it. For my own part, after enjoying it on a murky festival screener I had cadged from a friend, I fired off a congratulatory e-mail and unwittingly became the first to "blurb" the film (and later staged its Austin debut as part of the "Blue Screen" series Kyle Henry and I programmed).

Bigger things started to happen when it played the Los Angeles Film Festival, setting the stage for Bujalski's Independent Spirit "Someone to Watch" award in 2004, and winning it great friends like producer's rep Houston King, who now handles its theatrical distribution with Goodbye Cruel Releasing, set up just to distribute the film.

Oddly poised to beat Steven Soderbergh to the multiformat punch, Funny Ha Ha will continue to screen in at least 15 more cities through August, coinciding with a run on the Sundance Channel and a DVD release from Wellspring. And did I mention that while Funny Ha Ha continued to pick up steam, Bujalski went and made an even better second feature, Mutual Appreciation, which premiered in the competition at this year's SXSW? So, if this isn't quite the end for this old-fashioned-but-by-no-means-by-the-book release, perhaps it's come full circle with a run at the Dobie, not far from where Andrew lived when he first drew inspiration from the people around him for the story.

Austin Chronicle: So what is it that has kept the film going?

Andrew Bujalski: I don't know, really a lot of dumb luck. At first, when we hit fests, we were getting reviews that were lukewarm to not so good, and then something turned. Basically it's kind of about good words passing on the film from one festival to another and people telling friends about it. Like when it played at LAFF, this really great review in Variety opened up Hollywood, so lots of industry people asked for screeners ... and they could tell pretty quickly that nobody would make any money. But then again, from that came Houston King, who's just had incredible love for the film and took it on because he wants to see it get out there.

And at the time, just by bizarre coincidence, I was selling individual tapes off my Web site, and there was a music industry guy [Gary Stewart] who bought one, and I recognized his name from the credits of an Elvis Costello compilation I really liked, and I asked him if that had been him, and it was. And so when he saw the film, he liked it enough that he tried to help us get with a DVD label, and when they didn't do it, he decided to get whole hog and get behind a theatrical release for the film ... and Houston just amazingly decided to run distribution.

The name of the company comes from an Elvis Costello album Goodbye Cruel World, which is actually pretty universally regarded as his worst, but you know, it's a great name. ... So it just seemed like a good way to recognize that initial connection and kind of deal with our trepidation about self-distribution.

AB: Right, I guess it has caused some confusion because the film really didn't seem to fit any of the usual categories. It's not really mainstream, but it's definitely not avant-garde, either. So, sometimes, I can get a little defensive about it with either praise or criticism where people say there's no story and nothing happens, but I think it's actually a pretty conventional story ... just miniaturized.

You know, screenwriting advice is always about "raising the stakes," which I don't necessarily disagree with, but when the stakes are always saving the world, then that actually gets kind of boring and abstract, but I'm interested in those situations we get into where the stakes are really low, but we still really care, and maybe that confuses people a little, but it's a lot more familiar to me.

AC: I've always felt that it was secretly set in Austin, regardless of where you actually shot it. When you wrote it, was it consciously about your time here?

AB: Well, when I lived there in 1999 and 2000, Kate [Dollenmayer] was my roommate, and I had this seed in my head, knowing her and her personal charisma, so I started working on a script. ... It's not really literally autobiographical or biographical for her or anyone I know, but then at different times, different scenes in the movie have felt connected to memories I don't think I was conscious of before. And obviously, that's the idea for the audience, is you want it to resonate in different ways with other people the way that some of it does with you. ... So, people in Boston totally think of it as being about them, and people elsewhere have thought it was set in a kind of nowhere so it could be about them, too, and then people in Austin think it's about Austin.

But then some of the people who like it best really think of it as anthropological, like a fascinating look in on this milieu they know nothing about. And then there are others who find it very true to their own lives but don't really care for it because it's completely unremarkable or embarrassing, and they don't want to watch it or understand why anyone else would. That's a legitimate reaction, but not one I'd hope for. ... Obviously, you want it to be specific, but then I also feel strongly that it's a film that's really designed to go out and have everybody bring their own interpretations and ideas to it, and that's really what makes it realistic, to whatever degree that realism's an issue.

AC: And that can be a little dangerous when we're more used to movies that go out of their way every few minutes to tell you the theme.

AB: Yeah, and I guess that's the risk. But that's also what people seem to respond to, and a lot of people have really gotten into that because they've been able to stumble on it with no preconceptions. But that can't last forever, and I think we're just big enough now that there's been a little backlash, reviews like "That wasn't as great as everyone said." And that's maybe a little sad, but then on the other end, we're talking about total obscurity. So, the two things to really watch out for are failure or success, because those are the two things that'll kill you.

Funny Ha Ha opens in Austin at the Dobie Theatre on Friday, July 15. For a review and showtimes, see next week's Film Listings.