'What we had,' said Jerry Lewis, 'was lightning in a bottle.' And now we have it in public domain. 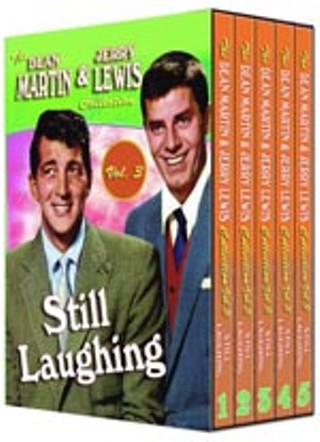 "What we had," said Jerry Lewis, "was lightning in a bottle." Fifty years ago, Dean Martin and Jerry Lewis were the biggest phenomena in show business – hotter than Elvis. Stopping traffic at New York's Plaza Hotel, the duo delivered an impromptu performance for screaming crowds below from their sixth-floor window. "You wanna come up for coffee?" the maniacal Lewis taunted the crowd. "We ain't got any!" Martin and Lewis' cinematic legacy was mediocre at best, never coming close to capturing their legendary combustible onstage alchemy. They were at their best in front of a live audience: mercurial, unpredictable, fearless. The closest surviving evidence of their art is their TV output. NBC's Colgate Comedy Hour – broadcast live each week from New York from 1950 to 1956 and now public domain – featured alternating hosts (including Martin & Lewis' creaky competitors, Abbott and Costello), but none approached Dean and Jerry's popularity. The revelation amid these artifacts is how fresh they are 50 years later, and how much Dino brought to the partnership. His comedic timing was equal to his partner's, providing a nonchalant counterpoint to Lewis' quicksilver energy. Martin & Lewis delighted in subverting the new medium of television, and the affection between the two is palpable. Sid Caesar had the genius; Dean and Jerry crashed the party. Lewis wasn't just bragging when he claimed the team didn't need scripts. Of course, the romance couldn't last. As Lewis' star and ego ascended, Dino bucked at his second-banana status. In a 1955 sketch spoofing TV game shows, he delights in holding a drowning Lewis submerged under water in a giant tank. Every time Lewis surfaces for air, Martin gleefully shoves him back under. "Don't you read the papers?," a panicky Lewis sputters between breaths. "The feud is over!" Martin finally walked in 1956, telling his devastated partner, "You can talk about love all you want, pallie. To me you're nothing but a dollar sign." Nonsense. While it lasted, it was true amore, and it still shines through.