Rarely did he singe the big screen with his craft, yet his dimpled impassivity was ready-made for audience personification 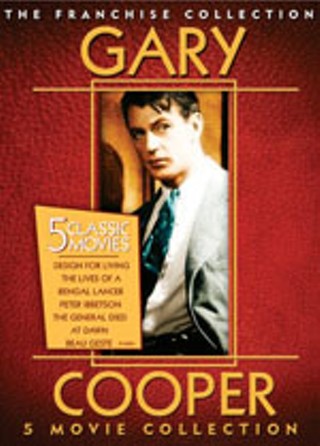 Gary Cooper was the Brad Pitt of his day (1901-1961), boyishly all-American, with a laconic, Midwestern grace and resolute self-possession. Rarely did he singe the big screen with his craft, yet his dimpled impassivity was ready-made for audience personification. "A ragged straw hat," ventures Miriam Hopkins in Ernst Lubitsch's Design for Living (1933), "with a very soft lining." Long relegated to the pointy end of the film's romantic triangle – miscast – Cooper simply can't keep up with the classically trained Fredric March, a hat of a different feather according to Hopkins. "Chic. Piquant. Perched over one eye – and has to be watched on windy days." Screenwriter Ben Hecht (His Girl Friday, Nothing Sacred) was no Samson Raphaelson (Trouble in Paradise, Heaven Can Wait), Lubitsch's ramrod poet/playwright, but the former newsman's tommy-gun repartee makes another one of the master's continental comedies dance like the horizontal bop. The Gary Cooper Collection counts four more films from the Thirties across two discs, though as with More Treasures From American Film Archives 1894-1931, which anthologized Lubitsch's riveting 1925 silent Lady Windermere's Fan, everything else here is merely bonus material in light of Design for Living. The "Trailers for Lost Films" segment of the Archives box featured footage from Cooper's missing Beau Sabreur, which capitalized on the success of Beau Geste, starring Ronald Colman in 1926. William Wellman's scene-for-scene remake of Beau Geste 13 years later teamed Cooper with Ray Milland and the always lively Robert Preston in another Foreign Legion adventure, but it pales next to George Stevens' rousing Gunga Din from the same year. 1936's The General Died at Dawn is overacted, overwritten (Clifford Odets), and undirected – a claptrap of Oriental intrigue – but The Lives of a Bengal Lancer (1935) rebounds gamely by spearing warring colonial India. Another entry from that year, Peter Ibbetson, places as The Gary Cooper Collection's sleeper a romance about 8-year-old soulmates separated by circumstance and class. The supernatural twist in the last third all but assures its place as the Somewhere in Time of its day.

To Be or Not to Be (Warner Bros.): Lubitsch sticks it to the Nazis with Jack Benny and Carole Lombard (in her last film) hamming it up as thespians turned Polish resistors.