'Freaks and Geeks' fans and their bittersweet assembly at the Alamo 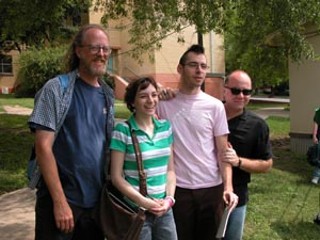 The freaks and geeks assembled for the Alamo Drafthouse's marathon of the lamentably short-lived eponymous television series have been seated since noon, and the event is scheduled to run all night, but the hardcore fans have been at it since 9am, brunching on authentic school-cafeteria fare with stars from the show at the Garza High School cafeteria (though the meal has actually been prepped by John Bullington, formerly of Mars and now the chef at the Alamo's South Lamar location). Certainly the crowd – slightly too young for its Styx and Foreigner T-shirts, likely acquired from Denim Edge, but wildly appreciative of series creator Paul Feig's jaundiced vision of suburban America circa 1980 – has quieted since co-star and co-writer Steve Bannos pumped his fists and proclaimed that "Austin Freaks and Geeks fans are the best Freaks and Geeks fans in the world!" at approximately 12:15. Yet moments of glory onscreen – as when tiny geek John Francis Daley catches the dodgeball hurled by his cackling teenage tormentor, played by Chauncey Leopardi – rouse them into cheers and applause.

The real danger in watching the show's 18 episodes back-to-back isn't numbness, nicotine withdrawal, or the thwarted urge to eliminate. Rather, it's the prolonged chafing sensation produced by the show's awkward, brittle honesty. It's the squirming and the cringing: at Daley's too-gradual maturation, at the unflinching regard for family relationships, at the outgrowing of childhood friendships, at the discovery of secrets and the smashing of illusions, at the horror of being made to shower after gym ("physical education," one parent fastidiously corrects onscreen). No other network television event has been this unafraid to make its cast look unattractive, to reveal its creators as overgrown Midwestern science-fiction dorks instead of industry players, and most significantly, to smash the illusion of the happy American childhood while somehow managing to still believe in its characters. Little wonder that, despite critical raves, the show got bumped from slot to slot on NBC and pulled after a season, resurfacing briefly on the Fox Family Channel of all places, and that three of its episodes never aired.

A question-and-answer session midway through the event suggests that the freaks and geeks involved with the show have grown older but not necessarily grown up: This is precisely why the group is so at home in Austin. Martin Starr, formerly über-geek Bill Haverchuck, has outgrown his glasses and fashioned a mohawk. His voice doesn't squeak, and he's trailing a girlfriend, but when he's inevitably asked what he's doing now, he pauses. After a stint on NBC's Revelations, Starr has begun writing "poetry that turns to rap," which he demonstrates. Sarah Hagan, known to fans as straight-arrow naïf Millie Kentner, is her character, all giddy smiles and shy admissions. She squeaks out an anecdote about giving co-star Linda Cardellini an Uno deck – a running joke on the show – in a holiday gift swap on set, and receiving a Hilfiger T-shirt in exchange.

"It said 'I Love Tommy' on it," she explains, and thinks a minute. "Wait, I just got it!" On the show, Tommy is the name of Millie's "secret boyfriend," whom she met at church camp.

The fans really love Dave "Gruber" Allen, the show's hippieish guidance counselor. He flashes a peace sign while clambering up to the mic and declares that the residents of Austin should "make it like the Vatican" and separate from the rest of Texas, if not from the rest of the United States. The audience, of course, loves it. They're less sure what to make of guest star Stephen Lea Sheppard, who went on from the show to oddball set dressing in The Royal Tenenbaums. "I'm open to [acting]," he says, "but it just doesn't seem to be coming."

"I'm considering becoming an electrician," he finally says, mildly. The audience titters. Is this irony? "No, I'm serious."

Sheppard shrugs off any possible offense and stays through the event. He can be observed munching on hot wings at last call, and when the show is over, he'll be turned out of the Alamo's cozy haven into the wake of the Warehouse District party people, rallying bikers, and the Gay and Lesbian Chamber of Commerce paraders keeping Austin weird.