The adventures of Taylor Lautner and Taylor Dooley (Sharkboy and Lavagirl, respectively) in conversation 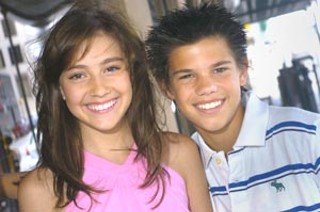 Kids films are a tricky business for the adults who direct them, and never more so than in the live-action arena. For every Babe there's a Baby Geniuses, and for every The Wizard of Oz there's a The Wiz. Once safely beyond the wonder years, filmmakers all too often lose that innate sense of wonder that made being a kid so much fun (okay, tolerable) in the first place.

His newest, The Adventures of Sharkboy and Lavagirl in 3-D, is his purest kid film yet, dispensing entirely with the logic of the adult world in favor of a dreamy, effects-laden foray into the mindscape of the preadolescent.

Co-written with then-7-year-old son Racer Max, the creation of Sharkboy and Lavagirl was, according to Rodriguez, "the closest I could ever get to going back in a time machine to interview my 7-year-old self on ideas for the movie."

That the film works as well as it does is a testament to the talents not only of the Rodriguez clan, but also of the film's pint-sized aqua-thermal duo, Taylor Lautner, aka Sharkboy, and Taylor Dooley, aka Lavagirl, who bring Racer Rodriguez's crazy-busy imagination to vivid, eye-popping life. Both originally from Michigan, 13-year-old Lautner and 12-year-old Dooley are the superhero endoskeleton to the film's serpentine tale of bullies, friendship, and the literally transformative powers of imagination. And, of course, they've also got some supercool costumes.

Asked what first attracted him to Lautner and Dooley, Rodriguez says he actually found the pair on the first day of casting:

"First Taylor Lautner comes in, and because of his martial arts training, he was so focused, no one else could compare. But then he starts leaping around the room and doing flips and I got great reaction footage of Racer watching this in the casting session. We knew right away he was beyond anything we could have imagined for Sharkboy. He already was a 12-year-old superhero.

"Two kids later, Taylor Dooley comes in, and she was so fresh and new, hadn't been in a movie before, and had the biggest most amazing smile. You could tell she would light up the screen as much as she lit up the room. ... It was one of those great days where your characters come to life in front of you, and fortunately Racer was there to see that process and to experience that."

The Chronicle spoke to Dooley and Lautner recently about kids films, the possibility of a Sharkboy and Lavagirl sequel, and the importance of nailing your own "superhero pose."

Austin Chronicle: How did you two end up getting the roles for Sharkboy and Lavagirl? I imagine there was some pretty stiff competition, right? And more to the point, how did Robert Rodriguez differentiate between your identical names on set?

Taylor Dooley: He got into the habit of calling us Sharky and Lava. We both heard about the audition from our agents. I auditioned five times before I actually got the part.

Taylor Lautner: I met with the casting director and with Robert and auditioned two times. They auditioned throughout the whole country for the parts, but eventually they came back and told me I got it so I was really excited.

AC: Do you know how many other kids you were up against?

AC: Were you two fans of Robert's Spy Kids films?

TL: Yes! I thought Robert did a great job with those. When I was younger, I just kept watching them over and over with my younger sister. When I heard Sharkboy and Lavagirl was a Robert Rodriguez film I thought, wow, cool.

AC: I know this is Taylor Dooley's first feature, so how did the shoot go for you? Any surprises?

TD: One of my favorite parts of the shooting was the fact that we got to do stunts, and I also liked when we had to eat stuff – like, we had whipped cream all over ourselves. And he stepped in some chocolate –

TL: Yeah, that was my favorite scene. I got to step in a puddle of chocolate and then I got to eat it. It was real chocolate, so I was lucky. Other than that, I'd say my favorite parts were all the stunts we got to do.

AC: Anything that maybe wasn't so hot?

TL: The school scenes were my least favorite to shoot.

AC: Did you two have stunt doubles?

TL: Yeah, we had stunt doubles, but they were mainly for when we couldn't shoot. We can be on set for nine-and-a-half hours, but we can only shoot for five hours. If there's just a shot of a hand or a foot –

TL: But all of the stunt stuff was us.

AC: Had you ever acted with green screens before?

TL: It was really different. Robert helped us a lot with the green screen. He would draw pictures and tell us what was supposed to be where.

TD: And if we still didn't get it, he'd actually get up there and do everything to show us how he wanted it.

AC: Kids films can be tricky for adult directors. What do you two look for in a great kids film?

TL: Well, you know, the 3D adds something. I wouldn't automatically think that kids like 3D, but the 3D is great. And kids like action.

TD: And the great morals in the story. Parents will want to take their kids to see films with good morals because there's so many good things a kid will learn from it. And superheroes.

AC: So does this mean we can expect The Adventures of Sharkboy and Lavagirl to be a continuing series like Spy Kids?

TL: Well, that's up to Dimension Films and Robert, but I'd love to do another one.

TD: Yeah, I'd love that, too. The set was so family-oriented that it was just great.

TL: It was hard for us to leave when the shoot was over.

AC: So, besides Spider-Man and The Fantastic Four, what kinds of movies do you two like to watch when you're not making them?

TL: The Last Samurai is my favorite film. I like action and comedy, but I'm not into the romantic stuff. Taylor Dooley, on the other hand ...

TL: I don't think I've ever seen a romantic movie.

TD: I loved How to Lose a Guy in Ten Days!

TL: Oh. Was that romantic? Or a romantic comedy?

AC: So you two are bona fide movie stars now. Do you want to keep acting or do you see yourselves maybe directing in the future?

TL: I've always said that! But for now we both have other films coming out. I'm leaving tomorrow for Toronto to shoot Cheaper by the Dozen 2. That's going to be a riot in Canada! But I've always said that if the acting thing doesn't work out, then I'd love to be a Robert Rodriguez, where I can write and direct my own films.

TD: We write and direct our own film together now! We'll shoot them with our siblings. I have a little brother and [Taylor Lautner] has a little sister, and we'll all be playing four characters apiece.

TL: We have a film in the making right now and it's going really good.