'Return to Giant' for its 50th anniversary 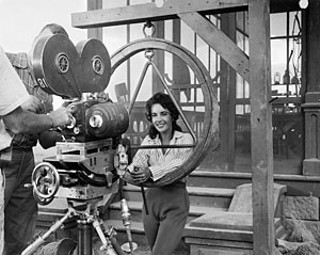 It's June, 1955, in scorched, draught-stricken Marfa, pre-Donald Judd, pre-Chinati Foundation, 50 years before Liz Lambert would open Hotel Thunderbird, the sequel to her Hotel San José. Marfa was just a somnolent, not-happening West Texas town when Hollywood director George Stevens – with heartthrobs Rock Hudson, Liz Taylor, James Dean (who would die in a car accident during postproduction), and Dennis Hopper in tow – flew in to film the now legendary Giant, loosely based upon the novel by Edna Ferber. This wide-ranging epic film traced four decades of Texas history through three generations of the cattle-baron Benedicts, during whose reign the source of Texas wealth shifted away from cattle to the oil that flowed beneath their hooves. Producer Kirby Warnock, the Big Bend Quarterly publisher with deep family connections in the region, made Return to Giant on the occasion of the film's 40th anniversary; his behind-the-scenes doc about the making of the film and its significance then and now is being shown by the Austin Film Society on Wednesday, June 8, at the Alamo Drafthouse Downtown as a run-up to the film's 50th anniversary event to take place in Marfa on July 2.

The film offers the recollections of area residents who remember Giant as if it were made only yesterday. Snapshots from home cameras and footage from the Warner Bros. vaults give us new insights into the circumstances surrounding Giant's production. Don Graham, the dean of Texana film studies, and Bryan Woolley of The Dallas Morning News offer their views of the importance of Giant as a successful representation of a Texas that once existed. George Stevens Jr. talks about his father's love of that film project. Bob Hinkle, who was hired to teach Rock Hudson how to "talk Texan," offers up his recollected anecdotes, as do several actors with relatively minor roles. For any fan of James Dean, Rock Hudson, or Liz Taylor, as well as those fascinated by how Lone Star culture has been represented historically on celluloid, particularly the cultural nexus of Anglo and Mexicano border-dwellers, this is a fascinating record of the mid-1950s in a remarkable area.ÊÊÊ

To mark the 50th anniversary of the production of Giant, Marfa is welcoming 500 cineasts, who will be treated to an outdoor screening of the classic movie sponsored by Kirby Warnock and Big Bend Quarterly. A pristine 35mm film print of Giant has been loaned by Warner Bros. for projection onto the Alamo Drafthouse Cinema's Rolling Roadshow giant air screen. The event will take place on the evening of July 2, right in front of the legendary Hotel Paisano. Tickets are $50 (benefiting the Marfa Public Library) and are available through clicking "Rolling Roadshow" at www.drafthouse.com. Additional information about the event can be found at www.bigbendquarterly.com.

Return to Giant screens at the Alamo Drafthouse Downtown on Wednesday, June 8, 7pm. Admission is $4 for Austin Film Society members and $6 general. Kirby Warnock will be in attendance. For more information, see www.originalalamo.com. Meanwhile, for information on AFS's Shattering the Narrative: European Cinema 1960-1972, which begins on June 7, see www.austinfilm.org.

Also at the Alamo this week, on Saturday, June 4, is a