You have to wonder about some of these people 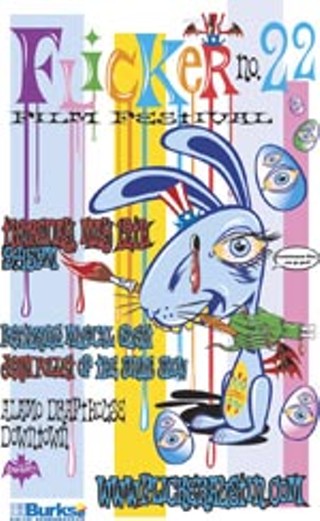 You have to wonder about some of these people. Super-8 and 16mm are all but dead, 35mm can cost more than taking care of the terminally ill, and quarterly noncompetitive screenings could be construed as self-congratulatory or, even worse, a complete waste of time. I mean, they might be fun, but, you know, will Pierson be there? Doubt it, dude. Aren't you kind of a sucker if you're doing this shit chiefly for the sake of self-expression and solidarity? Get real, right? This is an industry town now. Yet, here they are: guardians, gravediggers, caretakers, provocateurs, scavengers, enthusiasts, filmmakers.

Flicker emerged in the Southeast during the early Nineties, right around the time that independent cinema grabbed this country by its chubby little cheeks and forced it to look in a different direction. If that's no coincidence, then is the fact that the organization has seen chapters sprout up all over the States and across the Atlantic as HD and DV have marched like liberators into the medium? This is the resistance, man. And even if I'm not quite sure what they're resisting, we all know that some great art can come out of those kinds of conditions.

Cory Ryan came from Chapel Hill, N.C., and founded Flicker Austin in January of 2001. There have been 21 festivals since – No. 22 is tonight, Thursday, May 12 – and each has operated under the movement's rules, showcasing free submissions shot on film and shorter than 15 minutes. At each screening, a $100 grant is awarded (Flicker also lends out equipment for aspiring entrants), and, if your work is just something else – if it exemplifies but is also extraordinary in its own right – it could transcend the $5 screening and find its way onto one of the Austin outfit's Best of DVDs, the second volume of which spans two years and was recently released on the Web (www.flickeraustin.com) as well as to local independent video stores. (It will also be available at the screening this evening.)

Of the nine shorts included here, the opener, Scott Rice's "Perils in Nude Modeling," is by far the most accessible. Polished, taut, and beautifully lit, it concerns the plight of an art student (John Merriman, whose facial expressions make the movie) simultaneously falling in love with the model he's drawing (Estephania LeBaron) and facing the whip of his comically intense teacher (J. Hudson Brownlee). Rice, a professor at UT, has an accomplished, stylized smoothness to his work – a necessary sense of compressing timing and tone – and so it's no surprise that he has some commercial directorial experience.

But if "Perils" is the collection's most accessible short, Seamus O. Hames' "Lullaby for M" is its most artful and intriguing. A stop-motion paper animation that recalls Harold and the Purple Crayon and the old Nickelodeon show Pinwheel, it's set to what sounds like an accordion, while cut-outs reveal a devastating poem dealing in love, old age, and regret. A "Meditation" altogether different is Jim Dunn's chubby fella in a chair chatting about what he likes after becoming one with himself: a good cigar or whiskey or a porno mag, depending. Scott Calonico's ("LSD a Go Go") "The Creepers vs. Monster Robot #2" is, as you might imagine, bizarrely effective, while "Women," by Ryan (the lone female representative; meanwhile, there are three Scotts) and her husband, the musician Doug Ferguson, is a hyper-colored collage of everyone from colonial ladies to World War II replacement workers to Kathie Lee Gifford. Justin Johnson's "Count Back From Ten," featuring Justin Hayward and Ryan Kirkpatrick, is a black-and-white ode to Hitchcock, the Coen brothers, and, apparently, the videography of the Cars. Like its eight accomplices, it's the product of a developing director making movies the way he wants to, which has rarely turned out to be a bad thing.

The Life Aquatic With Steve Zissou (Criterion): When you get Wes Anderson and Criterion together, the fact that you BitTorrented the film in January is rendered irrelevant. You would buy or rent the extras disc itself at the store if possible, would you not? I would.

The Steve McQueen Collection (MGM, May 17): The four-disc set includes The Great Escape, Junior Bonner, The Magnificent Seven, and The Thomas Crown Affair, as well as a couple of documentaries and commentary by the likes of Sam Peckinpah, Eli Wallach, James Coburn, and Norman Jewison. Also look for the first season of Wanted Dead or Alive in June.