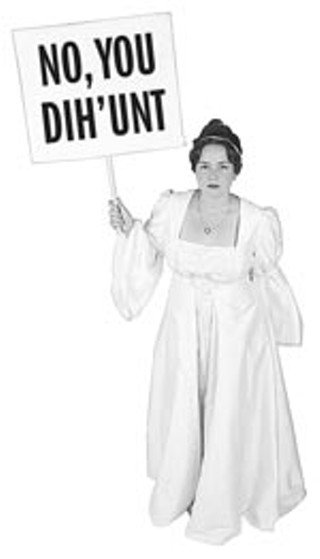 When Rachel Green (Jennifer Aniston) is introduced in the first episode of Friends, she's a woman on the brink of a nervous breakdown. Standing in the middle of the coffee shop in bridal regalia, disheveled and glassy-eyed, she's a runaway bride played for laughs. But it's also a statement of her emancipation – the beginning of a character's evolution which viewers would observe as the series unfolded.

In the real-life story of Jennifer Wilbanks, the runaway bride from Georgia, the commentary on her behavior and the cross-country hoopla around her search were almost as stunning as the amount of time CNN, MSNBC, the Fox News Channel, and other sources spent presenting her story as news.

But in TV land, this was news. An attractive young woman from a prominent family, she had it all. A handsome fiancé, a high-end Southern wedding with 600 invited guests. Since it's unfathomable that she'd walk away from all this, something terrible must have happened to her. Her family issued a plea on TV and other media to find Wilbanks. Prayers were uttered, vigils were held, pleas to the camera for whatever big, bad evil spirited her away were issued.

And then there were the talking heads, the so-called news people who went far beyond reporting this "news." CNN's Nancy Grace, whose apoplectic self-righteousness would be laughable were it not devoured by a large audience, turned this story into another "Endangered White Woman" piece.

Eeek! A precious, affluent white woman is lost! Eeek! Evil looms around every corner, and the biggest victim of all? ...

I was going to say white women, but really, it's any TV news viewer with half a brain wondering what is really going on in the world.

When Wilbanks surfaced on Saturday (her wedding day), the story came clear. She got cold feet. She boarded a Greyhound bus and hit the road without telling a soul. When she resurfaced she told the FBI a couple in a blue van had abducted her. Moments before this bit of information was revealed, I said to myself, "At least she didn't say it was a black couple." A heartbeat later it was revealed that she said it was a Hispanic couple that took her.

Now, in spite of Wilbanks' dissing Hispanic couples in blue vans, there's a part of me that felt sorry for her. TV, for one, is stuffed with messages, overtly and otherwise, that promote the same fantasy wedding scenario and, more egregiously, the "natural" longing all woman have for one.

In the aforementioned Friends, Monica Geller (Courteney Cox Arquette) explains to her brother why the wedding, not the marriage, is an important rite of passage for women. Similar language ("the most important day of her life," "the day every woman has been waiting for") appears so often in TV fare from Sex and the City to Everybody Loves Raymond to several reality shows that it appears as if TV writers must consult the same Big Book of Definitions, under Women and Weddings: They all need it, want it, got to have it. Expensive wedding dress and small dramas necessary; happy ending required.

That wedding story, conflated with the TV news narrative of the endangered white woman, was a curious, well, marriage. How interesting (but not surprising, I suppose) that everyone, from Wilbanks' family to the media to law enforcement, assumed their roles so effortlessly. As if they'd all read the same Big Book of Definitions, too. This time, the entry was Missing Women. Because she didn't end up on a coroner's slab, the response was less than compassionate. No, the reaction, most notably from Minneapolis-based criminal profiler Pat Brown, was to pillory Wilbanks as a conniving, evil woman. When it was suggested that Wilbanks was merely "troubled," Brown wouldn't have any of it, accusing Wilbanks of everything from duping the government to being a lousy American. All because she had a very public meltdown about walking down the aisle, the thing she's supposed to want more than life itself.

Seems to me that there's a whole other narrative there, more complex than the runaway bride, the "happily ever after," or the "you complete me" narrative. Whether this narrative ever makes it into the Big Book of Definitions we all know by virtue of watching TV and movies remains to be seen.

I'm not holding my breath.

Austin's own Sublime Stitching goddess Jenny Hart serves as a judge on Craft Corner Deathmatch on the Style Network (reruns on E!). She appears on episode No. 106, with none other than Eartha Kitt, and No. 110. The original airing was last week, but will repeat throughout May. For those not in the know, Craft Corner Deathmatch pits craftster against craftster in a timed challenge to see who can come up with the most awesome DIY craft project armed with little more than a glue gun and a theme. Celebrity craftster judges name the winner. New episodes air Thursdays at 8pm. Check local listings for other air times.