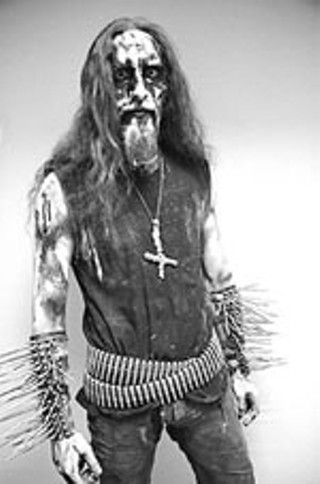 Ah, Norway. Land of beautiful, vast fishing villages, cod liver oil, and black metal. In fact, it may be what Norway is best known for, albeit in its satanic, black-mass-attending, animal-sacrificing, church-burning form. The history of Norwegian metal is as twisted and dark as the country's landscape. As part of the Alamo's Music Mondays, Metal Storm: the Scandinavian Metal Wars takes a look at the scene 10 years after murder, arson, and suicide forced a burgeoning lifeblood back underground.

The film centers around footage from a Norwegian documentary called Satan Rides the Media, which traces the tumultuous history of black metal through the early Nineties, when a string of church burnings turned the nation's eyes toward a small group of sinister metalheads. More specifically, the film spotlights Varg Vikernes of the one-man band Burzum, and his involvement in the burning of the historic Fantoft stave church in Bergen. After a journalist interviewed Vikernes (who later changed his name to Count Grishnackh) and he confessed, the media went buck-wild with the satanist slant, and they portrayed the metal scene as black-clad, evil-obsessed devil worshippers with no remorse and a penchant for hoarding animal heads. Vikernes adored the media attention, and even used photos of the churches he burnt (three in all) on the cover of a Burzum album. (This would become briefly popular, as the band Mayhem used a photo of bandmate "Death" on the cover of an album, shortly after he blew his brain out with a shotgun.) Vikernes, however, had a more traditional reason for burning the churches. "The church [in Norway] has behaved so disgracefully," says a clean-cut Varg from prison. He reasons that he was just trying to save Norway from Christianity and return it to its pagan (not satanic) roots.

But in-fighting and shit-talking within the metal scene soon turned to backstabbing, literally. When Mayhem singer Euronymous was found stabbed to death in his Oslo apartment in 1993, it didn't take long before Vikernes confessed, and the scene all but disappeared for the remainder of the Nineties. Still, the spirit of metal still burns in the hills and forests of Norway.

In conjunction with the Monday, May 9, 9:45pm Alamo Drafthouse Downtown screening of Metal Storm, photographer and former Texan Peter Beste presents his collection of black metal portraits at the Space (next to I Luv Video on Airport) on Saturday, May 7. See 'Norwegian Black Metal – Photographs,' for more.