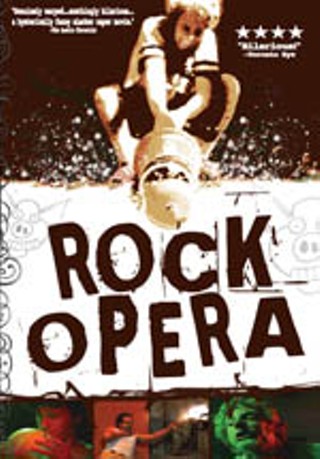 Bob Ray's 1999 Austin-shot stoner opus, Rock Opera, has finally made it to DVD, courtesy of Go-Kart Films. That's a six-year hiatus between the film's original release and the resulting accolades – among other kudos, the film won a "Stoney Award" from countercultural bellwether High Times – and the here and now. In between, Ray pursued a series of almost-gots, as in "Hey, guess what I did this week: I almost got my film released on DVD," that found him sparring with Troma Entertainment's notoriously parsimonious overlord Lloyd Kaufman, Film Threat's distribution arm, and assorted other possible distro outlets, none of which offered much hope in the way of filthy lucre finding its way back to penniless director Ray.

"We had a bunch of great successes at festivals and stuff," Ray explains, "but as far as releasing it, everyone kept telling us, 'It's too narrow, and the target audience is so small that it wouldn't be profitable for most people.'"

Hard to fathom, since Rock Opera's target audience has always been those in the slacker, stoner, musician mode. Austinites, really, but the demo-graphic exists wherever kind bud is inhaled, amps are blown, and beer is consumed, with or without the benefit of skateboards.

And then there was James Bond III's Rock Solid Productions.

"He was pursuing me for, like, six months," Ray says. "But the weird thing was that his company is a family-friendly Christian organization, so I don't have any idea what the hell was up with him. To this day he still sends me e-mails!"

All the while, Ray continued to sell Rock Opera VHS tapes online (some 700 of them), all the while continuing to make short films and eventually beginning work on his Austin Roller Derby documentary Hell on Wheels.

Ultimately, it came down to Will Keenan and the fine folks at Go-Kart Films – an offshoot of the punk rock Go-Kart Records label – to break the stalemate and make Ray the offer he couldn't refuse:

"They offered me an advance and a fair deal on royalties per unit sold, which, if you're familiar with the sketchy accounting practices of DVD and film distribution, is a very big deal, as well as giving me full creative control."

That creative control is one reason the finished DVD contains such a wealth of bonuses, including a hefty 13 of Ray's previous shorts, five music videos from the likes of Nashville Pussy and the Fuckemos, and, best of all, a "Rock Opera Drinking Game" commentary track during which Ray and assorted cast and crew become progressively more inebriated until some sort of hesher nirvana is reached. And you thought "Hi, Bob!" was fun.

Rock Opera is available from www.gokartfilms.com or from Ray's site, www.crashcamfilms.com, as well as from local alternative rental outlets. For a production journal "with all the dirt," see www.rockoperathemovie.com/journal/index.html.