Tweet
print
write a letter
Take heed, puny humans. Global advertising warlords stand ready to unleash an unstoppable sales army breeding a Trojan-horse-like marketing virus constructed of the finest milled lumber from Hollywood and Cyberwood. Summer gamers 13 to 30 will soon feel the shock and awesome brass-knuckled marketing blitz of the Karl Rove kind. Try to duck and cover all you want, but from theatre trailers to TV buyouts, Internet splash ads to magazine spreads, games sewn of silver-screen franchises will soon suck cash from wallets like a rusty air lock broken loose into the vacuum of space. With more zeros than George Lucas' checking account, the box-office haul from gaming revenues this season might just well overshadow its own genetic heredity. Below you will find just a sampling of the force that will soon bind you into a world of flight and fantasy. 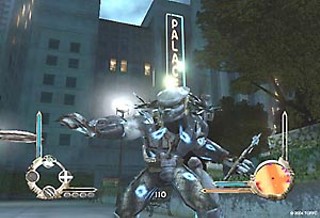 Those menacing off-world predators that tore Arnold Schwarzenegger apart make an unlikely antihero in this small-screen version of the big-budget money shakers. Set between 1930 and 2030, time traveling across Earth's history as a brother from another planet, it's your task to protect your identity from a mafia organization and its kingpin, who wants to yank you and your race's presence out of the closet. The trademark predator cloaking armor suits aid your stealth approaches as you explore a dangerous Earth city on the hunt for squishy human prey to gut like pigs. ET: The Extraterrestrial this is not. In fact, if you want to toss honor into the incinerator, you are free to kill every human you encounter. And with an army of one arsenal ranging from spearguns to smart disks, plasmacasters to combisticks and wristblades, this predator model could probably come back with Osama's head on a stick. But beyond the simple hack-and-slash, the predator unit comes equipped with such strategic hardware as thermal and neural scanners that help tailor unique attack styles with a combat system that varies depending on your prey. It's not exactly Rainbow Six, but sometimes the mindless fun can be better than Prozac.

Worthy buzz for the film, as well as for the game, might cause a surplus in the napkin industry to mop up the foam spilling from kid and adult mouths alike. Those of us who have aged with the caped crusader for decades know the real thing when we see it. And if this new direction on the franchise lends a darker edge to the Black Knight lore, some of his credibility may find redemption after the pitiful offerings of late that turned our batty hero into a neon-lit, Las Vegas freak show. Joel Schumacher lynching party anyone? With a game script written by JT Petty (Tom Clancy's Splinter Cell) we can expect more than a simple kablam! zap! game storyline, one which purports to burrow deeper into the intricate psyche of our caped crusader. With such larger-than-life villains as the Scarecrow and Ra's Al Ghoul in need of handcuffing, Batman will require an organized Palm Pilot to schedule time for romance into his crime-fighting days. Electronic Arts promises a fully realized Gotham City underworld, filled with all the grit and texture one would expect in this universe of corrupted souls. Billed as a meticulously rendered landscape that emulates director Christopher Nolan's upcoming film, the game suits up players into latex and offers locales such as Himalayan monasteries and the fabled Wayne Manor to be explored at your own leisure. And, yes, the Batbelt is fully functional and at your command, as is a roaring Batmobile that will send you rocketing through a twistingly dark Gotham. But, like the real Batman, your wits, brain, and sheer muscle will serve as your strongest allies in the never-ending fight against faceless evil. 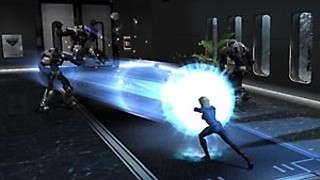 Judging from the skin-peeling response to theatrical trailers for the movie, this game title may do best to somehow separate itself from its own kin. Certainly no easy task, but if the action and graphics of the game exceed that of the movie, there may be something above mediocre here. Of course, this incarnation of a Fantastic 4 video game can't be any worse than its predecessor (circa 1997), which sported some un-Marvel-ous graphics, even for its time. But word on the street is the visuals may be outstripped by a complex, original storyline, penned by X-Men 2 scribe Zak Penn. If that's not the case, then it may just be a fun time jumping to and fro from the brains and abilities of four fantastic personalities: Mr. Fantastic, the Thing, the Invisible Girl, and the Human Torch. Fans of the original cartoon series might wince at seeing their childhood versions of these characters re-re-created into modern-day updated models of heroic civility, but, alas, no sacred ground shall be left undisturbed if there is rumor of a buck to be made.

Charlie Bucket is reborn as Tim Burton tortures his own unique vision of Willy Wonka out of the Roald Dahl classic. In the Charlie and the Chocolate Factory game, scheduled for release three days before the film, kiddies may tear an early golden ticket and delight in every child's fantasy. Much like the movie, this virtual world is designed as a visually sensational trip through a sweets-laden candy factory that makes ever-lasting Gobstoppers and an infinite line of chocolate delights. But all is not well in this storied wonderland. Oompa-Loompas will need your heroic aid after other children spoiled on greed cause the fabled factory distress and destruction. Will this fantasy find kids licking their computer screens in delight? Or will parental eyebrows raise up against an exploitative commercialization of their own childhood classic? And does Gene Wilder get a cameo? Whatever the outcome, there is no greater motivation for a child to delve deeper into a game than one that promises piles of sugar confections as power-ups to help you to the finish line. Coupled best with a virtual dentist program. 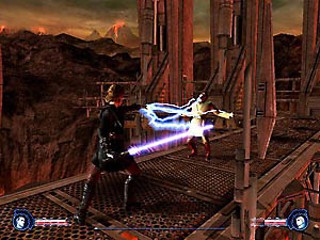 With the myriad Star Wars titles running red line to keep the franchise burning supernova, it's hard to distinguish among them. After all, is there really more than one way to slice a light saber? Judging by the exponential sales numbers of this multiplatform series, apparently there is. In this go-round, the guys in the white hats (the Jedi) risk life and tentacle to thwart the invading dark menace of the guys in the black hats (the Sith). OK, nothing new about this standard-fare space Western, but somehow LucasArts builds in just enough tweaks to make you will the box off the shelf and into your hands. As in the mythology of life, Revenge of the Sith offers you two paths: that of good and that of evil. Respectively, as Anakin Skywalker or Obi-Wan Kenobi, it's your sworn duty to bring murder and chaos into the universe, or to protect it from such phantom treason. LucasArts assures epic duels in this version, with upgradable attacks and Jedi combo moves not yet tested by even the most zealous farm boys. Also, rumored hidden in the game are plot developments that coincide with the film, which will not be released until a week after the game hits stores. Naturally, master marketing-Jedi George Lucas hopes these advance plot crumbs may draw out a fan base starving for any early morsels of storyline prior to the opening of the final chapter in this three-decade-old franchise. Revenge of the Sith also promises an authentic John Williams soundtrack backing you, as you fight the one and only man in black. No, not Johnny Cash. Darth Vader.