What a Longer, Stranger Trip It's Been 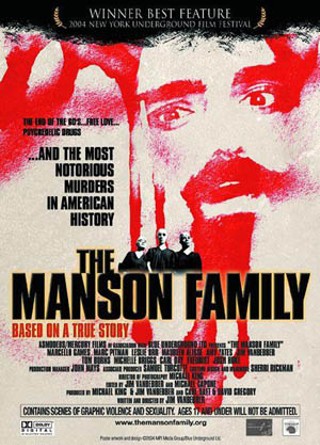 When director Jim Van Bebber and producer/cinematographer Mike King decided to make an honest film about acid-drenched 20th-century bugaboo Charles Manson and his Family, they had no idea the project would take nearly a decade and a half to see through to completion, release, and now, on April 26, a double-disc special edition DVD from MPI Media Group.

Begun almost as a lark in the summer of 1988, Van Bebber, who at that point was best known for directing the popular underground bloodbath Deadbeat at Dawn, christened the nascent project Charlie's Family and continued shooting principal photography in Dayton, Ohio, through the fall of 1993. After that came a series of shaky distribution deals that never really got off the ground until Dinsdale Releasing finally gave the NC-17 film a theatrical release in 1994.

Surprisingly for what was begun as "a two-week exploitation film," Van Bebber's horrifically accurate Day-Glo ode to Sixties psycho-delia gone haywire netted quasi-positive reviews from the likes of Roger Ebert, who noted that the film had "undeniable power and effect" and who ultimately gave the film three stars "because it is remarkable enough I do not want to dismiss it." (He also called it "an act of transgression so extreme and uncompromised, and yet so amateurish and sloppy, that it exists in a category of one film – this film.")

"Mike and I had seen a Geraldo Rivera special called Murder in America," recalls Van Bebber, "where he interviewed Charles Manson, and we were just amazed at how badly Geraldo came off and how well Manson appeared. We [decided that we] ought to make a film that included the things that they couldn't show in the 1977 TV movie Helter Skelter."

The interim years, as actors aged and stacks of the film sat undeveloped in Van Bebber's refrigerator, were hardly fallow. His film My Sweet Satan managed to pick up some festival awards in 1994, and a series of music videos for industrial gorehounds Skinny Puppy garnered him underground acclaim and a growing fan base among those with a penchant for the extreme. But, even then, the retitled The Manson Family "was always the albatross around my neck," adds the director.

"I went through so many people who wanted to dump it straight to video or wanted to re-edit it, but I wanted to try and get an arthouse release of that version of the film, and that's what eventually happened. We got a professional 35mm blow-up and a 5.1 Surround sound mix, and I'm very pleased with the way this film has been treated."

While Van Bebber's currently working on a new pair of films ("a biker film and a film about Al Capone"), it's this murder-spree masterpiece that will most likely be fomenting uneasy cinematic dreams for years to come.

"Be true to the kind of film you want to make," the director has learned. "Don't make a film that you have contempt for, just to pay the bills. You're making something that hopefully people will want to see generation after generation, so make the best film you can make."

Bloody good advice from a man who knows the meaning of the word patience.