Action: The state Senate and House incentive bills are in committee; a 'Scanner' delay; plus, Marc English, Joe Conway, and Sandra Bullock 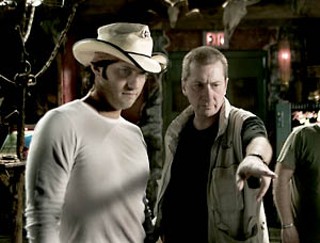 Robert Rodriguez and Frank Miller on the set of the Austin-shot Sin City, an adaptation of Miller's graphic-novel series. The film opens on Friday, April 1. For a review and showtimes, see Film Listings.

• A Bill on Capitol Grounds: Efforts to boost the Texas film industry and fight off the evil hordes from Louisiana and New Mexico are percolating at the Capitol, and cities may soon be able to play the incentives game. Senate Bill 1142 sets aside $20 million to lure projects to Texas, based largely on the use of state film crews. The good news is it's been assigned to the Subcommittee on Emerging Technologies and Economic Development, which is chaired by bill sponsor state Sen. John Carona of Dallas. An aide to Carona says a public hearing is coming any day now. State Rep. Peggy Hamric of Houston is behind House Bill 2954, which is identical to the Senate version. It's in the Culture, Recreation and Tourism Committee, chaired by Rep. Harvey Hilderbran of Kerrville. The committee includes Austin's own Reps. Dawnna Dukes and Todd Baxter. Meanwhile, Rep. Rafael Anchía of Dallas has a so-far committee-less bill that would allow counties and cities to offer their own incentives through sales taxes. Want to urge them on (and make sure I've got something to write about in the future)? See www.house.state.tx.us and www.senate.state.tx.us for contact info.

• A Scanner Delay: Warner Independent has pushed back the release of Richard Linklater's Philip K. Dick adaptation A Scanner Darkly from September of this year to March 2006 citing delays in the animation process. Rumors are swirling that Bob Sabiston, the creator of the rotoscoping process that Linklater also employed in his dreamy Waking Life to turn live-action into art, is no longer involved with Scanner. Sabiston says he cannot comment, and film producers did not return calls as of press time.

• Private Idaho, First Class: Austin design guru Marc English has followed up his cool do-it-yourself, punkish design for the Criterion Collection release of Linklater's Slacker with the Criterion version of Gus Van Sant's My Own Private Idaho, and he hopes Wal-Mart is paying attention. English used the film's Shakespearean influences in the design to give it a more classic appearance and added a dreamy quality to the DVD menus in fitting with the plot. English says the key is to make the look timeless. Oh, and he designed the letter "O" in the cover with a cute cherub exposing his backside, something he particularly enjoys in light of self-censoring Wal-Mart's decision to carry the DVD version. Bring on the sales-boosting controversy. Up next for English is the DVD design for Mojados: Through the Night, Tommy Davis' doc that played South by Southwest in 2004, as well as a Criterion DVD to be named.

• And the Rest: Austin screenwriter Joe Conway (Undertow) is now Hollywood Joe, as he has followed the work to L.A. Conway is adapting the nonfiction book Journal of the Dead, about two 25-year-old friends who get lost while camping, resulting in the suspicious death of one. Tobey Maguire is sniffing around the project... On the press tour for Miss Congeniality 2: Armed and Fabulous, Sandra Bullock continues to profess her love for Austin, but when asked by Jon Stewart what that famous old-time hamburger place is in town, she was stumped. Somebody drive that lady to Hut's, Dirty's or, my favorite, Top Notch... Street Tale of Terror from J.D. Hawkins and Corey Shields is just out on home video as part of Maverick Entertainment's Creep FX horror line. The guys are in preproduction for a Houston shoot of the sequel in May.

Send tips to filmnews@austinchronicle.com. For a review and showtimes, see Film Listings.