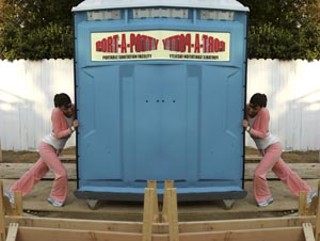 Ah, SXSW. There's nothing like a megaconference to remind you of how old your bones are. Here I am, on a post-SXSW Sunday, thinking, Yikes! I have a column to write. As it turns out, a helpful reader unwittingly helped turn on the juices when he sent this note:

I was curious about how hot new shows go "dry" for up to 4 weeks at a time after all the initial hoopla. My two fave shows, Veronica Mars and Desperate Housewives, have had all reruns for what seems like forever. If I check the official Web sites, I know in advance. I record reruns all the time, because I don't always check the Web sites. ... The freaking Statesman doesn't even put a "R" next to the show posting if it's a darn rerun. Arrrgh!

Yo, Brian, I feel your pain.

I don't have a definitive response, but I have some adequately cynical, educated guesses. First, it's the ratings game. Forget for a hot minute that the Nielson System is under fire from several organizations. For all the technical know-how that's out there, Hollywood can't seem to grasp the idea that maybe, just maybe, there should be at least one other system to tally viewers, if only to make each entity earn their keep. No, instead, everyone relies on this antiquated and highly questionable system of counting eyes. In order to assure high ratings (which translates to ad dollars), a network would rather run a rerun than run it against a highly anticipated event. I don't know when episodes of Veronica Mars or Desperate Housewives were rerun, but I would bet they were rerun on dates that had some blockbuster something or other on another network (usually a sports event, an awards show, or a special).

As for Desperate Housewives and other ABC hits like Lost, Alias, and The OC and 24 on Fox (all serials), the word in the trades is that the creators of those programs are now facing the daunting task of surpassing themselves. Now, in the olden days (or what seems like the olden days, just two years past), there used to be something called the Showrunner's Bible. This was supposedly the go-to manual on how a series was going to evolve. If writers strayed off course, the Bible was there to remind of the series' narrative mission. Well, from what I can gather, the Showrunner's Bible has gone the way of a used tissue. Running on the momentum of these show's hard and fast early success, show creators are now confronting the real task at hand: Deliver and deliver big. Take Lost. Are they going to quench devoted viewers' curiosity about the polar bear, the strange Frenchwoman, and the unseen monster in the jungle in a well-crafted way, or are they headed for a train wreck? Or is it all teasing and hot air to keep viewers guessing and writing fretful notes to TV writers like myself in search of an answer? I don't know, but I do know that the ratings game is in the mix, even if the rules are flawed.

Thanks for asking, Brian. Though I didn't answer your question, you helped me write this week's "TV Eye."

Stuff I Do Know

Buster Lives! The controversial "Sugartime" episode of the children's series Postcards From Buster airs Monday, March 28, 8pm on local PBS affiliate KLRU. The dustup over the children's show began last month when it was discovered that "Sugartime," which showed how maple sugar is harvested by two Vermont families, had two presumably lesbian couples in the episode's backdrop. Though not the focus, the appearance created a small firestorm (see "TV Eye," Feb. 11, ).

"We respect the right of parents to make viewing choices for their own families and we encourage them to do so," says Maury Sullivan, KLRU vice-president for marketing and communications, by e-mail. "By airing the program during primetime we are allowing parents and caregivers to make the choice." For a detailed statement from KLRU, go to www.klru.org.

One night only! William Hung, the American Idol contestant who won hearts and fans following his unique rendition of Ricky Martin's "She Bangs," comes to Austin for a one-time only performance on March 26 at 3:30pm. The show takes place in the back yard of the Steam Team, 1904 Koenig. Hung's performance benefits the Austin Sunshine Camps. Admission is $5. For more information, go to www.thesteamteam.com or www.sunshinecamps.org.