Photojournalists Dalton and Martinez's stunning documentary embeds us in Medellin, Colombia's barrio of La Sierra, the battleground of a 40-year paramilitary gang war. Reminiscent of City of God – only real – the young residents profiled in this film speak candidly about their world, revealing painfully honest portraits of people who spend their entire lives simply fighting – for respect, for love, for hope. As one local elder edicts at the beginning of the film, "these are just kids with guns." Most striking of all the subjects is Edison, the 22-year-old neighborhood paramilitary commander, who juggles midnight automatic weapon shoot-outs with his six children from six different women. Yet he is a natural leader, and his story alone, much like the others in La Sierra, is one of devastating power. 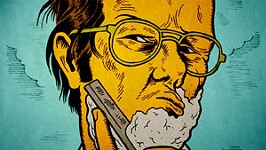