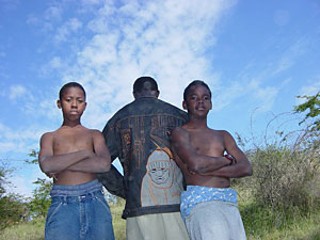 THE BOYS OF BARAKA

Perhaps the most powerful and important documentary I have ever seen. With The Boys of Baraka directors Heidi Ewing and Rachel Grady record a coming-of-age tale that touches on every fathomable emotion level. Over the course of three years, the two women followed 20 boys from inner-city Baltimore to the Baraka School in Kenya and then back again, to observe how the experience changed them – for better or worse. The film focuses on three boys in particular: Robert, whose mother was shot by his father, who is serving 13 years in prison; Devon, whose mother is an on-and-off drug addict; and Montrey, who is emotionally unstable, violent, and out-of-control for countless reasons. Considering all of their subjects are considered "at risk," the boy's personalities blossom in front of Ewing, Grady, and their cameras. Nothing is withheld: The emotional honesty is stifling. You should see this film.

The Boys of Baraka received a Special Jury Award and was the Audience Award runner-up.