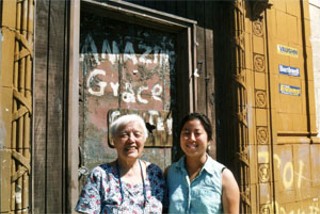 Growing up in Columbia, Mo., as "the only Asian girl for miles," filmmaker Grace Lee felt "proud to be an original" – then she moved away and found not only that her name was uncommonly common but that the associations it carried – "nice," "studious," "soft-spoken" – epitomized the generic stereotype of the Asian-American female. The Grace Lee Project follows Lee as she tracks down as many Grace Lees as she can, both the "nice" ones and the not so nice, and ends up spotlighting the lives of people so absorbing in their own right – from a pastor's wife to an 88-year-old activist to a teenager who set her high school on fire – that you easily forget Lee's original purpose for interviewing them. Her meandering meditation on a name, sometimes personal, other times linguistic or anthropological, and stuffed throughout with little curiosities (the average Grace Lee has taken 3.5 years of piano) results in a documentary filled with personality, humor, and, well, grace.