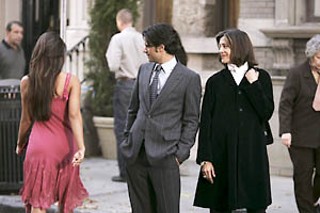 Seinfeld, The Sopranos, and All in the Family are legendary TV shows. So, caution should rule when making comparisons to these and other milestone series. Yet, the folks at ABC thought it clever to compare their new John Stamos series, Jake in Progress, to one of my favorite series in its promotion of the show.

With the tagline "Different sex, same city" (I misquoted that last week), the show is blatantly referencing the beloved Sex and the City. Any show that dares to compare itself to a landmark series invites harsh scrutiny. And that's too bad. Jake in Progress is not Sex and the City. It's an entirely different animal. Because of the unrelenting comparison to S&TC, I was initially unable to see it for its own charms.

Speaking of charming, Stamos oozes it in a TV role that should woo a legion of new fans and make the rest of us forget his run in that Eighties-era sitcom Full House. Stamos stars as celebrity publicist Jake Phillips, a dimple-cheeked, multitasking, cell-phone-wearing, natty man-about-town who handles each professional crisis with a wink and a phone call. Not the case with his romantic life. First dates turn him from suave to sweaty in nothing flat.

Jake is no Carrie Bradshaw, and that's just fine. His coterie of friends, Adrian (Ian Gomez), Patrick (Rick Hoffman), and Wendie Malick as his boss, Naomi, are not Samantha, Charlotte, and Miranda. And that's fine, too. No, in this handsome wish-fulfillment series, Jake is the alpha male in a group of likable but very flawed men, and one middle-aged, pregnant woman (Malick), who is, at least in the tape I've seen, the most capable of unbridling any man or woman who dares to cross her path. Her role as boss and friend is strongly flavored with an older-sibling-like devotion that I predict will work swimmingly: unless the series creators try to goose up the show with unnecessary sexual tension. As Jake's friend and boss, Naomi signs his checks, but Jake also knows she's got his back (and vice versa). It's a very real, though rarely seen, male-female relationship that I, for one, would like to see more of.

As Jake's male pals, Gomez and Hoffman are amusing, but several shades too schlubby. Adrian is the show's George Costanza, if George had married Susan. Bored with his 9-to-5 life, wife, and kids, he lives vicariously through Jake. According to the trailers, Adrian's sedate family life is what Jake longs for, if only he could just find the right woman. And this is how Jake in Progress defines itself as the ultimate wish-fulfillment series for a certain type of woman: Here's a gorgeous man who wants to commit, wants to settle down. He doesn't see married life as a ball and chain, but as a domestic pastoral. Adrian talks a lot about the drudgery of married life with precarious repetitiveness. It would be nice to see him show some love for his family to round out his character.

Patrick hails from the opposite end of the spectrum. Desperate, neurotic, and a little bit creepy, he's a second-rate performance artist with a chip on his shoulder. He's the guy that just can't let go of a relationship after the inevitable breakup he causes. In the pilot, he creates a performance art piece by placing himself in a glass box (ã la David Blaine) for 30 days – outside his ex-girlfriend's apartment so he can watch her through binoculars. His stalker behavior is softened by Hoffman's performance and by what could be a running gag throughout the series: Patrick's professional jealousy of Blaine. Any comparisons of Patrick's work to the more famous magician immediately turn his attention from whatever he is obsessing over into an aggrieved, rodentlike snit. He's hilarious.

As opposed to our friends in Sex and the City, Jake's pals are heavy on foibles and short on defining traits that would make them more complex. Instead, Jake gets to play the "pretty one" while the rest in the group flock around him like moths, hoping to drink in some of the glow – and, as I said before, Stamos' Jake is certainly worth drinking in. But I have hope. Filmed without a laugh track and with some cleverly assembled, breezy scripts, Jake in Progress brings some life to the faltering sitcom genre.

Jake in Progress, Sex and the City