AFS presents On the Border: Films of Rogelio Agrasánchez Sr. 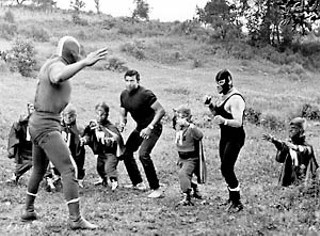 In times and places where a night at the movies is the entertainment event of the week, films that provide the most bang for one's buck are the ones that will draw a crowd. After all, why spend your hard-earned time and money on a plain old movie when you can spend it on a movie-cum-wrestling-match-cum-beauty-contest? This is the logic that birthed the Bollywood formula; it's also what fuels the madcap, genre-be-damned, action-romance-monster romps of Mexican camp king Rogelio Agrasánchez, three of whose films the Austin Film Society will screen from March 16 to 18 as part of South by Southwest Film 05.

It's easy to see why Agrasánchez's films crammed theatres in the 1970s. His is a world where bare-fisted courage can defeat entrenched and corrupt power, and where people spend a lot of time driving around at night, looking determined. It's a world where the good but weak face-off against the strong and cruel, but where you'll never go too long without a girlie show or a fight scene starring leotard-clad midgets in capes. It's also a world of fast-moving plots, shameless melodrama, and super-groovy sleaze-lounge soundtracks. In short: pure, unapologetic entertainment.

In Los Campeones Justicieros (1971; screening March 18), a mad scientist sends a team of midget assassins to kill off a crew of masked wrestlers led by the stoic Blue Demon, and to kidnap the contestants in the Miss Mexico beauty contest, which the wrestlers just so happen to be judging. Displaying astounding bullet-dodging and motorcycle-riding capabilities in addition to their masked mystery and ripped abs, the wrestlers head off to the scientist's secret lab for more fist-fighting and babe-saving. In El Castillo de las Momias de Guanajuato (1972; screening March 17), the formula is much the same, plus mummies.

By 1980, Agrasánchez had wearied of wrestlers and mummies, and tried his hand at something more serious: stories about mistreatment of Mexicans on the Texas border. In Las Braceras (1981; screening March 16), a pair of corrupt border patrol agents takes bribes to waive illegal immigrants through at the border, only to beat and rob them once they're in Texas. When one of their victims dies, the man's daughters make the perilous journey to Texas to find them. Genre-bending as ever, though, Las Braceras is as much an exploitation flick as it is a social commentary, as the daughters meet no shortage of ne'er-do-wells with designs on their innocence. But whether it's mad scientists or la migra, at their core all three are simply battles of good versus evil designed to resonate with folks whose own lives are a struggle against unfair odds.

Note to the monolingual: All of the films are in Spanish and only Los Campeones Justicieros will be screened with subtitles. Buck it up, though: Screenings of the other two films will start with a synopsis of the plot to encourage English-speakers to experience, perhaps for the first time, the pleasures that come from watching spectacle-oriented films in a language you might not fully understand.