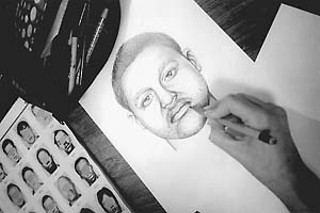 A compelling documentary starts with a compelling story, and a compelling story usually starts with being at the right place at the right time. That's what happened to David Beilinson and Zachary Werner as they were shooting footage of a forensic artist in a Miami police station. They were planning to put together a series about the artist, but things changed dramatically when two preteens were raped in the course of a week.

"We realized, 'This is something big, here,'" Beilinson says. "A week later, the police discovered that [the perpetrator] was connected to seven cases."

The result is Code 33 – directed by Beilinson, Werner, Michael Galinsky, and Suki Hawley – which follows two Cuban-American detectives as they search for the rapist whose victims ranged in age from 11 to 79. The fact that the Code 33 team was shooting from the very beginning not only gives the story a surprisingly complete arc, it also means that by the time the national media descended on Miami to pick up the story, the team already had established relationships with detectives Fernando Bosch and Elio "Chills" Tamayo that got them complete access to the investigation. That access is what allows the film to illustrate the surprising nature of modern police work: Despite sophisticated tools like DNA analysis, the investigation still depended on plain old gumshoe techniques like knocking on doors or spending hours and hours driving around literally looking for guys who resemble the artist's sketch.

"It was shocking to me that all they had to go on was this sketch, and that all they could do was go out there and look," says Hawley, who edited the film. "So, one of the things I tried to draw out was the expectations we have for law enforcement, versus the reality of an investigation."

As the case dragged on, the detectives came under fire for failing to make progress, and the team started to worry about what would happen if the rapist were never caught. To hedge their bets, the crew widened their focus to include the media's role in the investigation, as well as the rich tapestry of life in Little Havana. "For us, a film is always going to be about a lot more than a single story," Galinsky says. "It always has many layers."

While access to the detectives' 17-hour days and endless Cuban dinners was an eye-opening experience even for Miami native Beilinson, it also came with its downsides. "I gained about 20 pounds drinking all this Cuban coffee and eating flan and bread," he admits. "But it was amazing hanging out with them. You have the perception of cops being a certain way, but these guys were just regular guys." Ultimately, Werner agrees, the relationships they developed were among the most satisfying aspects of the film. "Just being with these guys for so long, we had a tight relationship. They've even said in certain interviews they felt that we were part of the team."

The feeling was mutual: The detectives have attended screenings in Miami, have plans to hit a New York festival, and at press time were working on an SXSW trip.