Andrew Does the Book of Luke

The Wilson boys are back in town with their 'Wendell Baker Story,' which took one an eternity to write and the other a month to shoot 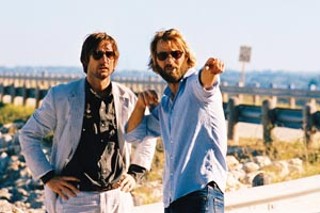 Frustration and persistence sometimes go hand in hand, but in most cases, one eventually has to beget the other. In an ideal world, persistence wins out. Getting in touch with Andrew and Luke Wilson proved one of those situations. Wrong numbers were given, calls were missed, identities were confused, lines were crossed, hearts were broken: sounds like a great film plot, right? But eventually, good triumphed over the forces of evil and botched cell phone numbers.

The same can be said for their film, The Wendell Baker Story. Well, at least the good and evil part. Luke, the youngest Wilson, plays a good-natured con man who gets thrown in the hoosegow for making fake IDs for illegal immigrants. When he gets out, he gets a job at a retirement home, which is populated with sharp-tongued cads played by Harry Dean Stanton, Billy Joe Shaver, and Seymour Cassel. The trio tries to help him win back his ex-girlfriend (Eva Mendes), but not without hassle from two corrupt male nurses, played by Owen, the middle Wilson, and Eddie Griffin. Behind the lens is older brother Andrew, who co-directed with Luke.

It's a family affair to be sure, and if the scenery looks familiar, it's because the film was shot here in town, something the Dallas-born brothers wanted from the start. "We shot the whole thing in Austin, and the script was written specifically for it," Andrew says. "I went to UT for a few years before I flunked out, Owen went there for about three and a half years, so we've spent a lot of time there."

The retirement community scenes were shot at the Perry mansion, and several others were shot in Barton Hills, the Blanco River, and a ranch in Wimberley, spanning a good portion of Austin and its outer limits. "We had 35 days to shoot it, which was rough considering the amount of stuff we had to do," Andrew says. "It was a long script. When Luke showed me the original, it was about a 220-page draft. I read it, and he said, 'What do you think?,' and I said, 'I wouldn't change a word ... you might be just the guy to help me direct this.' And we got it done on schedule and on budget."

The brothers Wilson have been around the film biz long enough to know how to get things done, whether it's starring in blockbusters of their own, or performing together, as they have in several of friend and collaborator Wes Anderson's films. "Directing was extremely stimulating," Andrew says of his debut. "The most fun thing about it was having an idea and, a day or two later, having it materialize in front of your eyes. It's fun to be able to use your imagination like that."

As mentioned at the start of this piece, persistence should always beat frustration, like rock beats scissors. Luke Wilson began writing the script for Wendell in 1999, and continued plugging away at it for years. "It was one of those things where I would set it down for six months, work on it a couple days, put it down again," Luke says. "I wasn't real diligent about it, but there was never really a rhyme or reason to it. To say I worked on it a couple of years, I always get uncomfortable. I feel like I should have the Bible finished."

The free-spirited character of Wendell Baker is also something Luke spent much time molding: "I was driving from Dallas to Austin, and I started thinking of a con-man character, somebody that had qualities I wished I had as a person, someone who always keeps moving forward, doesn't worry about what people say. I know the fast-talking hustler type is kind of the standby character in movies, but I've always loved the screw-ups." In turn, The Wendell Baker Story is ripe with screw-ups, shakedowns, and the Wilson brothers' trademark deadpan humor. It's way funnier than the Bible, really, and it shows that persistence still pays off.