Alex Gibney takes on 'The Smartest Guys in the Room' 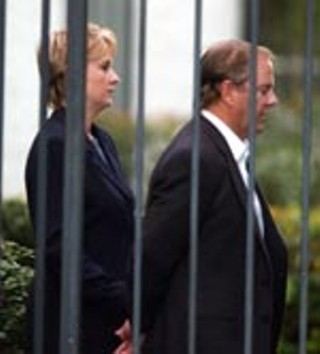 Around the turn of the century, one of the many markets Enron had cornered was that of Fortune's Most Admired Companies list. The Houston energy giant received the honor, like, 50 straight times or something (figure possibly based on Jeff Skilling's Hypothetical Future Value Accounting – we're not really sure, because we either don't recall or weren't alerted), which is ironic since, as you might've heard, it was headed by a bunch of thieving turds. Many things have happened since that high point, but here are just a few: Enron filed bankruptcy and collapsed in a steaming heap of congressional hearings and indictments, partially as a result of Bethany McLean's reporting in the aforementioned magazine; McLean and Peter Elkind wrote a book called The Smartest Guys in the Room that Barbara Boxer likely masturbated to at least once; Alex Gibney made a documentary based on the book; and shaggy-dog Shoney's, which languished as a Least Admired Company while Enron executives biked the Baja and hosted strippers in their offices, remade itself into a restaurant chain to, if not be reckoned with, then certainly be admired anew for its puzzling longevity. Also, paper shredder sales skyrocketed as concerns about identity theft (and, in the cases of Arthur Andersen, Merrill Lynch, and countless other once-respected financial institutions, prosecution) escalated. I even bought my mom one for Christmas.

The thing we're concerned with is Gibney's HD-shot film, a flashy two-hour dagger filled with candid talking heads, bizarre found footage, reenactments, extreme sports clips, creepy swing jazz, Tom Waits, Peter Coyote narration, and convoluted but indisputable facts expertly conveyed. "I don't know if I set out to make a new kind of documentary, but I did feel that there were certain things I needed to do and I felt that I had to make a new kind of rule book," says Gibney from his office in New York. "Enron itself was a company that was very much about illusion, right? They were able to create a vision that so many people wanted to believe in because they were powerful. Nobody was willing to ask questions: That's really the most damning and interesting part, and that's scary, because you think of how many other powerful institutions are able to get away with such extraordinary shit simply because they strut their stuff. So, with the idea of form following content, I felt that it was very important to try and find a style that would, um, celebrate that."

Gibney found that style, but it should be noted that what results is a rather fair and measured study. For instance, a fascinating sequence overlaying tape from the midcentury Milgram Experiment – involving actors, inflicted electric shock, and the exploration of how our inner evil emerges as long as authority condones it – with recorded (and celebratory) conversations among Enron traders during the yearlong California power crisis is gradually met with relatively empathetic testimonials from former employees – notably the hyper-intelligent Amanda Martin-Brock – and an underlying survey of corporate culture complete with the admissions of analysts who were, for the most part, fooled along with everyone else.

"We had to come up with some way of visualizing the emotions behind the numbers," Gibney says. "It wasn't easy. It was very difficult. It had to be a real human story – in the end, it was a real human tragedy – because that's what I think Peter and Bethany did. ... Everyone who was working on the film worked very hard to try to make a film that would be able to explain and yet would be accessible so that people could be able to go to the theatre and enjoy it as they would any movie."

It's fun to imagine Ken Lay and Skilling not going to the theatre to enjoy this movie, instead eventually catching it in the TV room at whatever white-collar prisons they're sent to after scapegoat-turned-star-witness Andy Fastow (himself disgusting) bears all next year. Whether that happens is up to judge and jury (and the timing of Magnolia Pictures' theatrical release of the film, of course), two roles Gibney insists he hasn't attempted to fill, and that his audience shouldn't, either. "I don't think that anybody at Enron set out to create a great fraud; I think it happened incrementally as the distance between the profits they were reporting and the cash they actually had coming through the door got greater and greater," he explains. "They had a vision for what they wanted to do, but got trapped. Showing something like that is crucial when you're making a movie. What was it Shaw used to say? 'A play about a right and a wrong is melodrama, and a play about two rights is a drama.' Unless there's some texture there, unless there's some sense of sympathy for the villains, then you're not really doing a good job of portraying human life."

Enron: The Smartest Guys in the Room screens at 6:30pm on Saturday, March 12, at the Paramount. Alex Gibney, Bethany McLean, Peter Elkind, and editor Alison Ellwood will be in attendance.