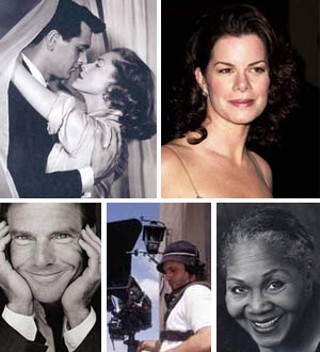 "We'd rather honor deserving people," explains Evan Smith when asked why the Texas Film Hall of Fame doesn't award in consistent categories season after season, "and then figure out where they should be slotted." Smith, founding co-chair and editor of Texas Monthly, pondered the quirky nature of the Lone Star State's most prestigious film awards ceremony during a recent conversation. The star-studded annual event is held at Austin Studios and honors actors, directors, screenwriters, filmmakers, and films from, influenced by, or inspired by Texas. Smith points out that while actors are inducted annually, such categories as the Rising Star award – which this year recognizes Robert Rodriguez – are given out with care. Yet Smith also acknowledges the irony of calling Rodriguez a "rising star."

It's "a little like calling Saddam Hussein a little mean," he says. "Robert defines star – the rising part is almost incidental – he's at the very top of the Texas film industry." This year, Rodriguez joins Academy Award winner Marcia Gay Harden, Dennis Quaid, Irma P. Hall, and Lauren Bacall as those being inducted in the Hall of Fame. They will be inducted by the likes of Joe Pantoliano, Joel and Ethan Coen, Billy Bob Thornton, and George Lopez. Ann Richards returns for her fourth year as emcee.

"When you look at the extraordinary careers of Rodriguez and the others, the diversity of their work is just amazing," Smith continues. "Dennis Quaid, in the midst of an extraordinary career comeback, so deserving of recognition after so many wonderful performances. Irma P. Hall: Who could ask for a more extraordinary story? Her life itself should be a movie. Marcia Gay Harden, the first graduate of the University of Texas to win an Oscar. What a wonderful message to send as the Burnt Orange Productions and the UT Film Initiative folks are getting up and rolling: that studying film at UT can have real results!"

Bacall is being honored for her work in Written on the Wind, exactly the sort of film that excites Smith about the TFHOF.

"Who imagined" is right. The Texas film industry has seen remarkable growth in the short time since the Austin Film Society opened Austin Studios at the old Mueller Airport in 2000, and the awards reflect that. The short history of the event has seen a dazzling array of names honored: Tobe Hooper, Sissy Spacek, Forest Whitaker, Terrence Malick, Farrah Fawcett, Peter Fonda, and Robert Duvall have been among the recipients in the past, as have the films Easy Rider, Giant, and The Getaway. And like all good events, it benefits the community. Proceeds from the awards ceremony and silent auction fund AFS's artistic and educational programs. Now in its 20th year, AFS promotes and supports creative filmmaking and filmmakers through grants, educational workshops, and such high-profile events as premieres and star-attended screenings that help to raise resources year-round.

"This is going to make more money for the Austin Film Society's various educational programs than any of the previous years have," Smith predicts. "In keeping with the Bacall theme, we really should have called this night 'To Have and Have.' It's the land of plenty time around here again. It really is."