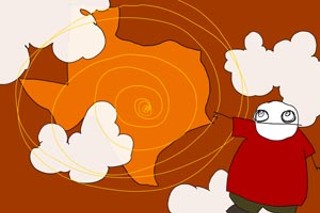 To: "Austin"
From: Sam Brown

I gave Sam Brown "Austin." He gave me three pictures: a portly stick figure pointing at an orange, cloudy Texas; a skinnier stick-man guitarist and his amp against a jagged sound-wave backdrop; and, last, what looks like a mean, green monster clobbering the signature stick figure with the words "I don't know anything about Austin" exasperatingly stamped beneath it all.

Perhaps I asked for too much in the name of SXSW. And maybe Sam Brown doesn't really get "Austin." But does anyone ever get Sam Brown?

Regardless, the effortless, speedy response to my request was impressive, colorful, and validating. Here's his stick-figure shtick: You give him a title, and, if you're lucky, he'll draw you a picture based, however obliquely, on that title and post it on his site, ExplodingDog.com. Responding to random e-mailed titles with single-lined, audaciously colored Photoshop renderings has made the 27-year-old Derby, Conn., art school grad a bit of a cult mystic over the past five years. Kings used to be the ones who commissioned good art. Now, any average Joe with an Internet connection can inspire elegant, quality work. The artist otherwise known as Adam Culbert flirts along the fine line between sparse and bizarre, giving people what they want but rarely giving them what they anticipate.

Austin Chronicle: A lot of people don't get your cartoons. I sure as hell don't. What's going on there?

Sam Brown: I try to draw something you just wouldn't regularly expect. People look at my pictures and try to see a cartoon with a punchline – as they would The Family Circus. But they really don't understand my drawings until they look through a good amount and see themes and ideas repeated. Think of my drawings as if the title and picture are a frame taken out of a film. There's something before and something after, and you're just catching this one moment of time. Sometimes I look at them a week after I did them, and I'm like, "What was I thinking?" But it's all part of a larger picture.

AC: Do you often disappoint people?

SB: People are usually pretty excited if I draw something for them. There are so many people I can’t draw pictures for. So a lot of people get upset. Then they send the same title for days and days. Sometimes people e-mail me and say exactly what they want to be drawn: Like, “I want a guy with a blue shirt standing in this corner, give me this.” They never get their stuff done.

AC: Someone told me to ask you why your drawings look like they've been scrawled by a gifted 8-year-old kid with cerebral palsy. No offense at all, but could you comment?

SB: The stick figures came about as just a simple way of representing an action. I like the idea of "genderless." When you simplify, you don't get caught up in details, which take away from an overall impression. There's a certain universality in simple.

Five Years of Exploding Dog: Sam Brown Discusses the Future goes down at 5pm, Saturday, March 12, room 18B of the Austin Convention Center. For more – including Brown's and others' status in the SXSW Interactive 2005 Big Bag Design Competition – see www.sxsw.com.