Why modern-day muckraker Ana Marie Cox couldn't care less about her critics – or even, at times, her audience 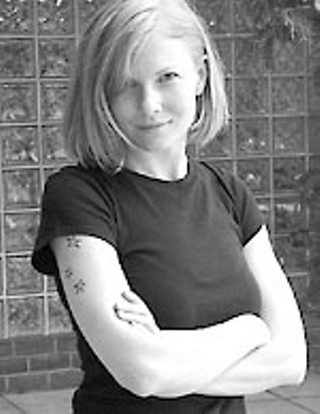 The New York Times is famous for transforming the hip into the obsolete merely by doing a feature about it. So, deciding blogging was the zeitgeist (two years after it had become last year's zeitgeist), the Times sent a naïf down to check out the bloggers at the Republican convention last August. He returned with an article that reads like a geek mash note to one Ana Marie Cox, aka the "Wonkette," with her "peachy cream skin and eyes of a very bright blue," who he was able to take to "a very expensive dinner at a really nice restaurant in Soho," etc., etc. Naturally, that peachy cream skin was pictured on the magazine's front cover.

Chalk another one up for a woman who seems to either fascinate or infuriate. When her weblog (www.wonkette.com), which mixes a jaded sex-joke schtick worthy of a Catskill's comic, circa 1940, with D.C. gossip, debuted in January of 2003, Slate's media critic, Jack Shafer, bashed it in an article incoherently titled "The Heaving Pukes Who Write Gawker [a New York gossip blog whose media umbrella publishes Wonkette] and Wonkette." "I had Jack over to dinner a week before that article came out," Cox says, "and he didn't even hint to me then that he thought I was a menace to his children."

Cox's Wonkette has become a stable D.C. read, at least for the political-media set. She quickly established herself by outing Jessica Cutler, an intern to Sen. Mike DeWine, R-Ohio, who was writing a sex diary of her encounters with various political adjuncts. Cutler's five minutes of fame led to the inevitable Playboy offer of a centerfold ... but Playboy wanted Cutler to pose with Cox. The old line D.C. humorists – Art Buchwald and Mark Russell – had never in their entire careers been approached to do nude layouts. Cox had clearly arrived.

Now her site lists an intern and several helpers. She has just sold a novel for a reported $275,000. Even Cutler has reportedly written a memoir. Clearly, blogging has been very, very good to Cox.

Alas, the Chronicle wasn't about to spring for taking Cox to a very expensive dinner at a really nice restaurant in Soho, so we had to catch up with her by phone.

Austin Chronicle: Since this is the week after Hunter Thompson killed himself, the first question is obviously a compare and contrast between the new, or gonzo, journalists, and the blogging journalists.

Ana Marie Cox: Obviously, they did it better. The worst thing that can happen to a first-year journalism student is to read Fear and Loathing in Las Vegas. Or, for a music journalist, to read Lester Bangs. Because they get the idea that, as somebody said, to write you just "open a vein." Well, there's an art to bleeding. People need editors. Thousands of people write diaries, but very few people read diaries, because very few diaries are very interesting.

AC: Yeah, Joan Didion was vaguely part of that group, and she made sure we knew every pill she was taking –

AMC: Ah, but did she? Didion always stands on the sidelines, she always lets us know exactly what she wants us to know. Her essays, if you go back, are perfectly structured. I have learned a lot from Joan Didion. Also Harold Ross, the original editor of The New Yorker. You know, it started out as a comic magazine. I love Ross.

AC: So, what blogs do you think need editors? Instapundit?

AMC: All of them. Not just Instapundit – besides, he doesn't really write, does he?

AC: I suppose the ethos of blog spontaneity is especially difficult if you want to be funny.

AC: What do you think about the way in which blogs and their audiences interact? Your blog doesn't have a comments section. Why?

AMC: I get lots of letters. I read them. But I am very possessive – my blog is my blog. This might sound incredibly snobbish, but I don't read comments on blogs. I think writing is a one-way medium.

AC: So, you don't care about an audience?

AMC: I have a virtual comedy room. I try things out on people I know with instant messaging. Having your audience be part of the evolution of your thought, the way [Andrew] Sullivan does, that isn't my thing.

AC: I know you've been around on the Web for a long time before Wonkette. You worked for Suck back in, what, 1995? How did you start?

AMC: I was at Berkeley, in the graduate history department. And I was on the Berkeley radio, I had a show dedicated to zines, because I had a zine. And the editor of Suck heard me and contacted me.

AC: So, you were part of the garage punk ethos back in the early Nineties?

AMC: No. I don't have anything against mainstream. I'd love to write for mainstream media, I just never got on that gravy train.

AC: Your blog is bravely trying to maintain the sex scandal quotient in D.C., but really, there's been an appalling lack of juiciness in the capital lately. Why?

AMC: People really don't have sex here. They replicate mechanically. Maybe it is the fallout from Clinton, or maybe it is that Republicans are better at repressing these things.

AC: How about the recent scandal of Jeff Gannon, the supposed gay prostitute-cum-fake journalist. Do you think something good will come of that? A prostitution ring in the White House?

AMC: Right, Karl Rove, political genius of the century, is going to be caught running a prostitution ring. I don't think so. Actually, I'm for Jeff Gannon. I think bloggers should be for having bloggers ask questions of the president. Isn't that what we are for? More legitimacy for weblogging?

AC: You've gotten a lot of criticism. For instance, Bob Somerby at The Daily Howler has taken shots at you. How do you respond to it? How do you deal with it?

AMC: I haven't read a piece of criticism of me that wasn't already in my head. Bob has said that I am invited into mainstream media forums to represent the liberals, and I'm not a good liberal. You know, he's right. And he has said that I'm not a serious analyst. And he's right again. 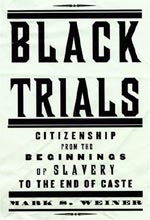 Black Trials: Citizenship From the Beginnings of Slavery to the End of Caste