Get Visionary With Me Here

We are no longer pioneers of the digital age. We're miners. 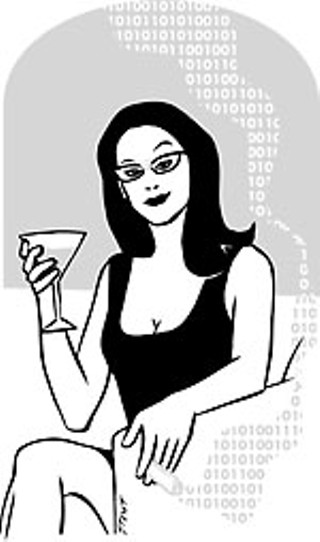 I've gone to many a South by Southwest Interactive in my day, but this is the first time I've attended one from out of town.

This year, 2005, I'm the "Visionary in Residence" at Art Center College of Design in Pasadena, Calif. Basically, I've become a designer futurist. I help to teach a class that's working on a Danish-sponsored design show in Copenhagen that's visualizing the year 2010. Doing this is even weirder than it sounds.

Since I'm a temporary Angeleno, I can now see SXSW Interactive from a new, exotic perspective. According to my design students, who itch to go there, SXSW Interactive is a distant, impossibly hip imbroglio where the pixelized crème de la crème is pushing the avant-garde hard enough to dent it. I never knew that before; when I lived in Austin, I naturally assumed that SXSW Interactive was some kind of overgrown geek accident. Sometimes, it even ended up inside my house. I used to throw the closing party for this gig. This year, that closing party will still take place, and, yes, I will be there hosting it, but, no, it's not at my house anymore. My party is being officially sponsored by the SXSW politburo at an undisclosed location. That's a wise precaution, for the last time I threw that party in my house, the Austin cops had to show up. They were perfectly nice cops – far cooler than Pasadena cops, who are real martinets, frankly – but, well, there were some noise complaints. It wasn't a boozy, orgiastic party: no nudity, no bongos. It's just that those digital media mavens from SXSW-I were talking so loudly, even at two in the morning, that they were audible to the innocent two city blocks away.

Things kinda got out of hand. The event's become too big and sophisticated for the pioneer ethos to last. Back in the Clinton years, the digerati used to merely trickle in, asking, "Uh, is this the cyberpunk's house?" Nowadays these cats have all got cell phones, Mapquest, and Google. So, last year they showed up on my doorstep in "flash mobs." A flash mob is a mobile, electronically connected gang, the human equivalent of Brazilian army ants. First, you get this lone scout who shows up, sniffing around and waving his antennae – "Hey, wait, there's free beer here!" – and out comes his phone-cammed cell phone from his ripstop nylon belt-pack: snick ... ka-sneee ... whizz! Eight minutes later, his entire buddy list comes piling out from every corner of the compass in a fleet of yellow cabs.

You know the way bloggers go ape when they discover a gay prostitute in the White House press corps? It's just like that, except with beer.

So, alas, it's the end of an era when it comes to flinging open my Austin doors for random cyber passersby, but never mind that: Here in Los Angeles, nobody would dream of a crazy stunt like that in the first place. I'm currently living in a gated community built by an eccentric patent-medicine mogul in 1903. It's a belle epoque Spanish, Moorish, multiple-cupola'd pile in Old Pasadena, and it looks like the Texas Capitol might look if, for a solid week, you drank nothing but patent medicine from the halcyon days of free-market narcotics. Except for the climate change – it's scarcely stopped raining since I got here, and they're thinking of renaming the place the "Wet Coast" – Southern California is a gorgeous place to live. By its very nature, it's just a favored corner of the planet. Not surprisingly, then, SoCal has three very grave problems with its quality of life: traffic jams, smog, and housing costs. Those are also Austin's core problems, of course. Here in L.A, however, these crises have been brutally ingrained into the very texture of society: Even the proverbial Little Old Lady from Pasadena drives her car like a flung javelin, and the gridlock is severe enough to turn the drive-by shootings into walk-bys. The very word "smog" was first coined here.

The city that can solve these problems is going to rule futurity.

I do expect to see these problems solved. They seem like "normality" to us, but I think they'll be beaten in the future. I don't yet know quite how, but I'm now in the belly of the beast when it comes to these particular challenges. At the place where I work, intelligent people fret over that stuff all the time. I'm starting to suspect that the 21st century's got some kind of cool, unsuspected twist here, something like a Google page-ranking algorithm for highways and traffic lights. Imagine a kind of Slashdotting for traffic jams. Get visionary with me here.

Did you ever notice how many of Austin's traffic intersections have those creepy little black videocams installed on the traffic lights now? If I were a partisan blogger, I'd cheerily tell you that they were reading your license plate number and running your tax records through Homeland Security. But this is a real publication, with ink, so I won't allege that. What I do wonder is: Why doesn't some machine, some kind of urban Cisco router, just count all the cars waiting, and turn the green lights on to maximize the flow? Couldn't Austin try something like that, in between installing solar panels? Do a trial run. Prototype it.

When you're a visionary at a design school, you get to thinking that way. It just can't be helped. It's an occupational hazard. It's like the creeping effect of designer minimalism. You know, "less is more," and all of that. There's a Design Within Reach store right around the corner here, and I could spend so much more on so much less that my wallet explodes. There's a digital angle to this "less is more" stuff that is severely underappreciated. When I was formerly a Texan author-journalist type rather than a Californian "visionary," I naturally lived like a pack rat. Then I drove my hybrid electric across I-10 to the gloriously unfurnished Pasadena pad over here, and I suddenly realized that I can thrive with something like 8% of my former possessions. Not that I've lost them. Basically – and this is the point for SXSW-I attendees – they've all been digitized. They got eaten by my laptop.

There's an Apple Store a block away, where Mr. Jobs is selling iPods like Amy sells waffle-cones when it hits 105 degrees. So, where're all my records and CDs? They're inside the laptop. DVD player? Laptop. Newspapers? I read Google News in the morning. Where're my magazines? I read Metropolis Online, I write stories for SciFi.com. Where's my TV? I got no TV: Compared to Web surfing on broadband wireless, watching a TV show is like watching ice melt. I tried real hard to sit down and watch a television dramatic episode recently – it felt like watching Vaudeville, with a trained dog act and a guy juggling plates. TV is dying right in front of us. It's become a medium for the brainwashed, the poor, and the semiliterate. Where's my fax machine? Laptop. Mailbox? Laptop. Filing cabinet? Laptop. Working desk? Laptop. Bank? Laptop. Place of business? Laptop. Most people I deal with have no idea I'm here in California. They'd never think to ask me. Why should they? They send e-mail, they get what they want, game over.

My laptop is even a library now; I've taken to reading books as e-text. For instance, a freeware, public domain version of Robert Louis Stevenson's The Silverado Squatters. This is the amusing real-life tale of a sci-fi novelist (Dr. Jekyll and Mr. Hyde, etc.) marooned in 1880s California. Stevenson shows up in an abandoned California mining camp, where he immediately sees and uses his first telephone. The good folk of Cali, these grizzled miner 49ers, are already hip-deep into high tech telecommunications.

California looks trendy, but it has deep cultural continuity. You can stroll the main drag of Hollywood, and it's Marilyn Monroe all the way. They're still retailing the sex appeal of a Tinseltown blonde stone dead 40 years ago! Man, even New Englanders aren't that thrifty. And those stars in the Hollywood sidewalks – I just saw one that belonged to Thomas Edison. By the standards of digital media, that was like spotting a live Diplodocus.

So, I'm a teacher, for a while. Now that I'm 50 years old, it does my old bones good to hang out with young people. I can even stand up in class and call them "young people" to their face, and they blithely nod and agree. And they no longer call it "new media" where I'm working; oh, no, it's "media design" now. Or it's just "design" and have done with it.

There used to be a big difference between media design and industrial design. I am watching that difference melt and vanish into air. There are young folks at my school making motorcycles, and you never see them touch a welding torch or a drive chain. They're making motorcycles on computers with a design program called SolidWorks, a kind of word processor for actual objects. They're not "computer guys." They're flat-out motorcycle guys, but of a new breed. Art Center has a big transportation school, and for them and their successors, that's simply what a motorcycle is. It's the interactive schematics for a motorcycle, and the thing with a kickstand is just a kind of hard copy.

I really have to wonder about a thing like that. So, I went to school to learn. Soon, it'll be time to party.

In addition to hosting the closing SXSW Interactive party of undisclosed time and whereabouts, Bruce Sterling will participate in the keynote conversation with WorldChanging Editor Alex Steffen at 2pm on Tuesday, March 15, in Room 17AB of the Austin Convention Center. See www.sxsw.com for more information.