Crispin Glover comes back to Austin with his 'What Is It?' in the can 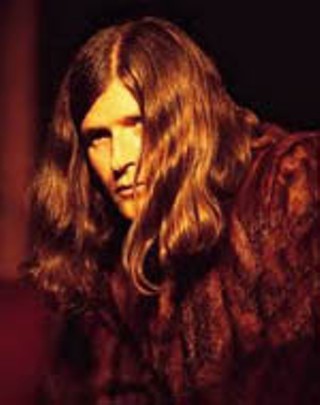 Actor, writer, multimedia artist, and 21st-century renaissance man Crispin Glover has always made a point of flying beneath the radar of Middle American pop culture, sometimes to the point, it seems, of utterly vanishing off the cultural map for a stretch or two. True, he's made a living in film for the past 25 years, essaying roles such as George McFly (Michael J. Fox's nebbishy prepaterfamilias in Back to the Future); the manic, speed-tweaker Layne in the acclaimed River's Edge; and, more recently, in an excruciating tour de force as the rat man Willard Stiles in the delightfully warped remake of that Seventies-era ode to a boy and his killer rat pack, Willard. Then there was his unnerving turn in David Lynch's Wild at Heart, involving BVDs chock-full of cockroaches. Say what you will about Glover's surrealistic mindset – there's no other contemporary actor working today even remotely in his sublimely skewed league.

And now, after working for nine straight years on his own unique cinematic masterpiece, the day has arrived when his film, titled What Is It? – which Glover describes as "being the adventures of a young man whose principle interests are snails, salt, a pipe, and how to get home, as tormented by a hubristic, racist inner psyche" – is finally ready to be unleashed on a (mostly) unsuspecting public. There's more, of course: Much of the cast is made up of actors with Down syndrome, "but it's not about Down syndrome at all," Glover is quick to point out. "Most of it was shot in Los Angeles, in and around my own home, and we built sets in Salt Lake City, Utah. It has kind of a mythic structure to it, so it's in more of an otherworldly setting." Considering the state of mainstream filmmaking these days, he couldn't have arrived at a more opportune time.

"Something that is just as important to me as the film, which is 72 minutes long, is that I'm also doing a 60-minute slide show," says Glover from his home in Los Angeles. "Some of the shows in Austin will be with the slide show and some will involve Q&A. This is going to be a 35mm print, too, which is why this has taken so long."

Financed entirely by Glover himself, who is also self-distributing the film and taking it on the road from Salt Lake to Austin to New York and elsewhere, What Is It? is, perhaps more than anything else, a subversive spit in the eye to the corporate entities that for the most part run roughshod over the underground and countercultural filmmaking and artistic communities in favor of producing yet more mediocre and wholly uncreative blockbusters and their lesser ilk.

"The fact that there isn't being anything sponsored by corporate entities and that counterculturalism is an important thing for a culture to have, to have a voice that questions that which is considered right and correct is a very important part of what the film was created for.

"There's a totalitarian aesthetic, basically, of corporate pro-culturalism, and it's hard to tell, but corporate thought processes are what is the major influence on how people see things and ultimately end up thinking in the culture," Glover says. "And so the film works within that realm, and that's something that isn't done. The only way to do that is if you fund it 100 percent by yourself. Which is what I've done."

It remains to be seen how What Is It? will play in Peoria, if it ever screens there, of course, but I for one have a giddy thought that once you get the Glover in the door, past the premanufactured reticence of a society weened for too long on fast food and faux-art, the delightfully intelligent contagion can only spread like a gleefully beneficial virus. Next stop? Wonderland. And then some.

What Is It? and The Big Slide Show screen with Crispin Glover in attendance at 4 and 8pm on Saturday, Feb. 19, and Sunday, Feb. 20, at the Alamo Drafthouse Downtown (409 Colorado). For more information, call 472-1320 or consult www.drafthouse.com.

Crispin Glover, What Is It?