After several years in the States, where he directed four films, German-born Wim Wenders decided to head back home and compose a love letter to Berlin 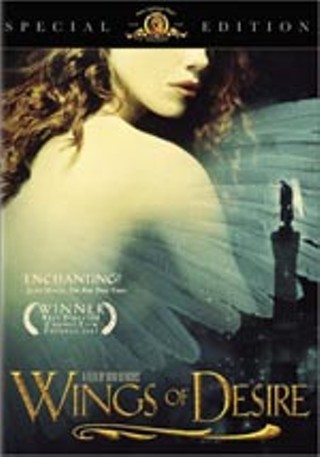 After several years in the States, where he directed four films, German-born Wim Wenders decided to head back home and compose a love letter to Berlin. This 1987 effort is the magnificent result. Shot largely in black and white by famed French cinematographer Henri Alekan, who came out of retirement to do the film, we see Berlin through the eyes of two angels, Damiel (Bruno Ganz) and Cassiel (Otto Sander). Wenders' penchant for wide, panning shots, combined with Alekan's gorgeous monochrome (in most of the scenes he is using his grandmother's old silk stocking over the lens) illustrates a bleak yet hopeful Berlin on the brink of freedom. Dressed in thick overcoats and boots, the angels (and there are many) traverse Berlin, both on foot and in the sky, listening in on people's thoughts. They are at the library looking over people's shoulders, on the subway listening to the self-deprecating musings of a husband, in an alleyway watching a child play by himself, on a rooftop trying to psychically coax down a jumper. Their function, it seems, is not necessarily to be angelic detectives, but rather observers of little things no one else notices. In the beginning of the film, Cassiel and Damiel sit in a convertible, invisible to all, and make a list of these things ("Today, a passerby on the street folded her umbrella when it rained. … A blind woman groped for her watch, feeling my presence") and discuss the possibilities of becoming human: "Instead of forever hovering above," Damiel says, "I'd like to feel a weight grow in me to end the infinity and to tie me to Earth."

Damiel's ties to Earth pull him lower when he wanders into a traveling circus and sees Marion, a trapeze artist. It is in this scene where the film briefly turns to color, as Damiel's desire "finally to suspect instead of forever knowing all" consumes him. Later, when she undresses in her trailer to a haunting Nick Cave song, drowning in her own loneliness, Damiel decides to ditch the wings. There are ancillary characters who anchor their ethereal counterparts, such as Homer, an elderly man who wanders around Berlin trying to remember landmarks, Peter Falk, who plays himself as a fallen angel turned prime-time TV detective (who knew?), and Nick Cave and the Bad Seeds do a cameo in the final bar scene. The extras – deleted scenes, commentary by Wenders and Falk, German and American trailers – illuminate an elegiac film, and the documentary "Angels Among Us," featuring interviews with Wenders, screenwriter Peter Handke, Ganz, Sander, and Falk, fleshes out the inspiration for the film. Wenders comments that he wanted to make a film about "the Germany in my heart,"and in doing so, he made a film about the soul.

Sealab 2021: Seasons 1 & 2 (Warner Home Video): Adult Swim's version of The Life Aquatic, but instead of a shark, the cartoon crew searches for an E-Z Bake Oven, debates placing monkey brains in robots, and other totally random things that are really funny when you're high.

The SpongeBob SquarePants Movie (Paramount): Those nutty right-wingers say SB's a homosexual, but his best friend is a giant pink starfish. Hmmm …

Wonder Woman: The Complete Second Season (Warner Home Video): Fashion forecast for summer: Bulletproof wristbands and golden lassos are the accessories to have.