Who the hell are you to define family? 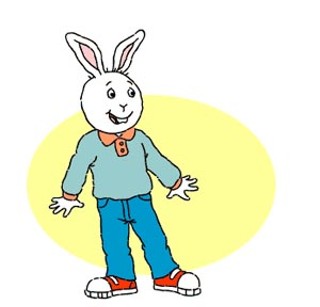 Strong words, considering that the aforementioned Bob is none other than SpongeBob SquarePants, the goofy Nickelodeon cartoon character. Buster is an animated bunny from the popular PBS series Arthur, whose "Postcards From Buster" segments feature Buster and his father traveling across the nation to meet real-life people to capture their way of life or work. The "they" from above refers to such self-appointed conservative watchdogs of popular culture as James Dobson from Focus on the Family. SpongeBob's subversive gay agenda is a threat to our youth, he warns. And Buster was recently rapped on the knuckles because of a segment that shows viewers how a family makes maple syrup. Because a lesbian couple heads the live-action family that does this work, the new Department of Education Secretary Margaret Spellings issued a strongly worded letter to PBS CEO Pat Mitchell. According to a Jan. 27 article by Washington Post writer Lisa de Moraes (among other sources), Spellings objected to the "questionable" lifestyle of the Vermont family in the Buster segment (titled "Sugartime") and threatened cessation of DOE funds should the Arthur episode air.

Sadly, on so many levels, PBS had already pulled the Buster segment before Spellings' letter arrived.

Reading about Bob and Buster, I remembered what it was like in 1963 to come from a then-unconventional family. My Dick and Jane books always featured a Mom and Dad. Divorce was unheard of and unmentionable, though, I would later discover, it was common among my peers.

When single parents finally appeared on TV, it was never because of divorce. No, the single parent was emboldened because their spouse had tragically passed away. It wasn't until One Day at a Time (1975-1984) that a single, divorced parent took center stage. Yet it took 15 more years before the divorced lovers of Once and Again (1999-2002) earnestly struggled to blend their families. Not acknowledging the divorce in my family, and many other families across the nation, did as much psychic harm as the divorce itself.

I feel for the Vermont family featured in the "Sugartime" segment. More importantly, I feel for 11-year-old Emma Riesner, the child spokesperson for the family. How much psychic harm comes from demonizing her family? And what of other families who live similar lives? More importantly, what are those of us outside this lifestyle going to do about it?

It may seem laughable that some starchy religious conservative is attacking an animated sponge, or that a micromanaging bureaucrat is taking a bunny to task. But I have a message for Dobson, Spellings, and all the rest. You cannot dictate how love or family is defined any more than you can control the weather. If what you see on TV offends you so much, turn it off. Just because your moral compass does not point toward compassion does not mean that unconventional, honest-working, loving families will not continue to thrive no matter how hard you try and disempower them.

As a rebuttal, WGBH, the Boston public television station that produces "Postcards From Buster" will air the Arthur episode in which it appears and make it available to any PBS affiliate that wants to do the same.

"We are definitely airing the 'Sugartime' episode of 'Postcards From Buster' but haven't decided on a time and date yet. Most likely we will air it in prime-time," said KLRU Vice President of Marketing and Communications Maury Sullivan by e-mail last week.

The Latino Comedy Project is featured on an upcoming episode of American Latino this Sunday night, midnight on CBS ... Reel Women Executive Director Sherry Mills and other Austinites appear on the Independent Film Channel's Ultimate Film Fanatic, Feb. 18 at 9:30pm and 12:30am. Reel Women hosts a viewing party at Ringers Sports Lounge, 415 Colorado. For details, go to www.reelwomen.org or call 448-9090 ... The best documentaries from last year's SXSW Film festival are featured in SXSW Presents starting next Friday at 10pm on PBS ... Every Saturday night in February, NBC affiliate KXAN will show a two-minute "Sinus Show" following Saturday Night Live.

PBS is now seeking adventurers for its new reality series, Texas Ranch House. The eight-part series (filmed in West Texas) will feature 20 folks who want to live as they did in the Old West. For details, go to www.pbs.org/aboutpbs/news/20050115_ranchhouse.html.

Mark Burnett Productions (Survivor, The Apprentice) is coming to town in search of a new lead singer for INXS and contestants on a related reality series. Must be over 21 (male or female) to audition and not already signed to a record label. Open auditions are Feb. 16 from 8am to 4pm at the Backroom. For details, go to www.inxsrockstar.com or e-mail music@markburnettprod.com.