The Texas Documentary Tour: Liz Lambert's 'The Last Days of the San José' 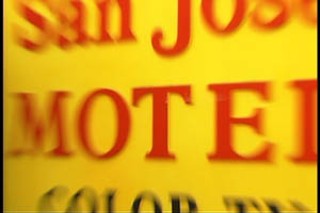 In 1995, Liz Lambert bought South Congress' seamy, trashed-out San José Motel – where both the street trade and those permanently or temporarily down on their luck lived for $225 a week (or $30 a day) – with the intention of transforming the vintage 1936 Spanish Colonial-style tourist court with a checkered, if colorful, past into the chic SoCo destination spot it is today: the Hotel San José. Alas, the financing for what was eventually a $3 million project took three years to come together and, in the interim, Lambert left her job as an attorney for the state attorney general's office to manage the motel's day-to-day, sitting behind the motel office window, renting its 25 rooms by the night, week, or month to those who lived in those increments. Collecting rent, listening to excuses and promises and simply observing, Lambert found herself increasingly stirred by the edgy existences of those who'd been living some kind of life at the motel long before she'd entered the picture. Through the lens of the camera that Lambert set next to her (at the time simply for purposes of documenting the motel life she was experiencing, only later deciding to turn it into a documentary), we step into the world of the motel before its transmogrification – right up to that moving day in 1998 when the old were packed up and moved out to make way for the motel's next incarnation – as a hotel.

So, in The Last Days of the San José, what we have at the skeletal level is a 90-minute long, Decameron-esque tale of the human underbelly of a real estate deal's unexpected detour, one that ultimately contributed hugely to the gentrification (the "SoCo"-ization, if you will) of South Congress. (Lambert notes that at the time the renovation finally began, the gentrification of the area was well under way, to the point that people were actually complaining that the motel was an eyesore.) On the surface, a seemingly straightforward tale, but oh, the wash of contradictory emotions this doc sets in play and the layers of knotty, unanswerable questions – moral, ethical, sociological – and city planning issues it raises. All of which are subtly, and hence artfully, conveyed by Lambert in this really terrific film.

We watch Lambert confront the quotidian travails of providing a roof over the heads of her South Congress clientele: the filth, squalor, in-room campfires, crack pipes, cops, and the occasional bloody remains of a transient's brief residency. But the camera lingers on the more stable but still shaky existences of several longer-term occupants: the articulate, tell-it-like-it-is teen with dreams of law school, who works at the motel as a housekeeper in exchange for a few bucks and free rent for himself and Dad, who fell on hard times, and has not been much of a father for some time now; Gerry Van King, familiar to Austinites as the guy who plays R&B bass in front of Jazz on Sixth Street, who we see waiting for his big music-business break; the single mom with the acrylic nails who manages to hold things together for herself and her 16-year-old son; and the young renegade couple, grappling with their forbidden love, she of upper-crust lineage, he, pierced, tattooed, and suicidal – and definitely not on her parents' short list.

Austin Chronicle: So, how did you segue from lawyer to hotel-owner-with-a-design-dream to motel manager/landlord and onto documentary filmmaker?

Liz Lambert: I bought the San José because I was always interested in design and because I was tired of being a lawyer. When the financing for the renovation was delayed, I had to become a full-time motel manager and concentrate on finding money. I even audited a few classes in the business school. I certainly didn't go into this with the intention of making a documentary. I would tell people about the incredible things that were happening at the motel [while waiting for our financing to come through] and someone suggested I should write about it. Instead, I bought a camera, solely to document the experience, not to be making a film. It was only when I saw my friends' interest in the footage I showed them that I decided to make a documentary. I didn't know anything about using a camera, so I made some big mistakes – there's some great footage that's totally unsalvageable – and once during a really great scene, the camera battery died right in the middle. But my goal, once I'd decided to make the film, was to follow Frederick Wiseman's notion about making a movie where the place is the star and try to give a sense of some aspect of community life without simply following one person. 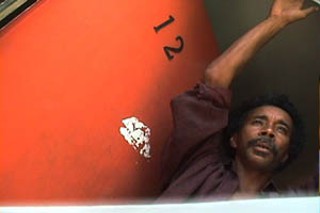 AC: The music is really outstanding in the film – you've got an original score by Stephen Barber, songs by k.d. lang, Lucinda Williams, music by the Tosca String Quartet, and Charlie Sexton, to drop just a few names. How did you pull all of that together?

LL: We went around and around about the music: We got the rights to the Dylan songs, Lucinda and k.d. gave me the rights to their songs, Sly Stone was easy. The Tosca Quartet girls came in and put down the strings, and Charlie Sexton came in and just played for a few hours, stuff he made up on the spot. The original score by Stephen Barber made up probably half of the music, and it worked really well.

AC: And now for your thoughts on the big issue hovering over the film: the gentrification issue.

LL: I think that one of the most interesting things about the documentary is how the issue of gentrification plays. You see in the film that all of the residents of the motel – and there were some people who had lived there for years – completely understood why I would want to shut the place down and renovate it. They didn't feel like I was the evil landowner throwing them out on the street; it was just that I was trying to make something better, to improve it – and, of course, I should seize that opportunity if I could. It made sense to them. People at the motel would talk to me about whether I was going to paint it (I was sad to lose the seafoam green, so I'm glad that it's preserved on the film), and where the pool should go, or whether or not to have HBO (decidedly yes). Austin Fontenaut had lived there for eight years, and on closing day he brought me a cake that said, "To Liz, To the San José, To the Future." Henry Prince brought me flowers. On the other hand, people who knew nothing of the motel would talk to me about how I was displacing people and how horrible it was. Sort of the white, liberal knee-jerk reaction. But the truth is, that motel needed to be shut down. It was in horrible condition, held together with gum and duct tape. When I'd buy new sheets, they'd be stolen or burned or bled on. I tried to make sure that everyone had a place to go when we closed down.

I was really conflicted when we shut down, but it wasn't because I had thrown people out of their homes – I would venture to say that almost all of them moved on to better things – it was because a community had formed there, and those were the people I lived with day to day, and suddenly they were gone and I missed them and the funkiness and unpredictability of it all. But, at the same time, I had been working toward that day for years – and it was exciting, the beginning of a new project – and I wasn't going to have to snake drains or collect crack pipes anymore.

AC: And now you're opening a second motel in Marfa. Are there parallels between the SoCo Hotel San José and the Marfa project?

LL: First of all, I hate the term "SoCo," but, yes, there are similarities in the sense that I am working with the same design team and the lines are clean and it feels calm.

The Last Days of the San José screens as part of the Texas Documentary Tour on Wednesday, Jan. 12, 7pm, at the Alamo Drafthouse Downtown. Liz Lambert will conduct a Q&A after the screening. Tickets are $4 for current Austin Film Society members and new members joining before the screening, as well as students, and $6 for nonmembers. They are available through the Austin Film Society (

www.austinfilm.org) or at the venue one hour prior to screening.