Woo, All Right Now, And Don't It Feel Like You're Going Bald and Homicidal!

The NYC-based filmmaker will always occupy a warm red spot in the hearts of horror fans everywhere for making gooshy skeins of nightcrawlers come out of a showerhead in his first film, 1976's worms-in-revolt epic Squirm, but it's his sophomore effort, the unnerving Blue Sunshine, that has truly entered the rarified status of cult movie.

Set in the mid-Seventies, it posits a paranoid world where all that LSD mom and dad dropped at Haight-Ashbury while keeping the world safe from the Man really did muck up their minds, causing them to trade peace and love for toupees and butcher knives as dormant chromosomal damage ups their kill ratio. Part social satire, part gut-churning horror film, and nearly as disturbing as finding your bong full of blood, Blue Sunshine has recently been released on DVD in a completely remastered and well-scrubbed print from Synapse Films. Alongside genre stalwarts like David Cronenberg's Rabid, Larry Cohen's God Told Me To, and George Romero's Dawn of the Dead, it's a horrific Seventies societal snapshot, all grim irony and screeching bad trips. Turns out the Man wasn't kidding when he said those drugs would mess you up.

We spoke to Lieberman by phone on the eve of Blue Sunshine's triumphant Alamo Drafthouse screening, and discussed the grue, the bald, and the ugly. 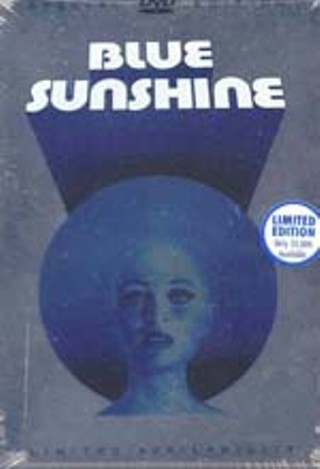 Austin Chronicle: Blue Sunshine is one of the most unique horror films of all time in that it seems to be both anti-drug and anti-hippie simultaneously, which must have been a difficult balancing act to pull off. How did you come up with the idea for the film?

Jeff Lieberman: I had just done my first movie with Squirm, which I knew was an immediate success financially because it went to the Cannes Film Festival and it racked up advances that pretty much exceeded what it cost to make the movie. So the same producers were anxious to do something else with me. The way I come up with some of my ideas is to take the things that people are scoffing at – especially people of my generation, and I'm pretty plugged into the now-graying baby boomers. I tend to say it's very easy to laugh at what the government is trying to say and what you see on the news, and everybody goofs on it, but what if they're right? I think it's much more entertaining to take it seriously. Wouldn't it be cool if you took LSD and it did damage your chromosomes and then it manifested itself in the actual person who ingested the LSD instead of in the next generation?

AC: And, of course, part of that reaction would be the sudden need for Propecia?

JL: Well, I decided to have their hair falling out because hair was so emblematic of my generation. Long hair was such a radical symbol of rebellion and youth that I thought, well, what's the opposite of that, and it was baldness. It wouldn't resonate so much today what with everyone having their heads shaved.

AC: Has Blue Sunshine's continued success over the years caught you off guard? It's become something of a cult film.

JL: Well, as a matter of fact, MGM has negotiated for a remake of Blue Sunshine. The deal is not signed yet, but it's in its advanced stages, and it's with Peter Webber, who directed Girl With a Pearl Earring, and they're serious about it. They're talking about having the story take place today.

AC: It's not a film that you'd think a major studio would jump at the chance to remake.

JL: Yeah, but then again, lots of people have talked about doing a remake over the years, and I've been approached several times. My fix on it is that the film is what it is for the times that I was satirizing, and to do it today you'd have to find some other way to update the irony or you'll lose it. It could be just a straightforward thriller about some designer drug that they took in the Nineties. But all they're doing now is optioning the rights, and, then, if they go ahead and make it, I'll be some kind of a consultant on it.

AC: What side of the fence were you on in the Sixties? Square or hippie?

JL: Well, I'm certainly not on the square side!

AC: That's what I figured.

JL: But I wasn't a hippie, either, because I was too realistic and cynical. I wasn't idealistic like all the people around me. So, even though I looked like a hippie – and there were hardly any real hippies – I hated for people to make all these assumptions about me just because of the way I looked. I didn't want to be part of a group like that. I wasn't anti-drug, but also I wasn't saying that there's no price to pay. I always knew that it ain't good for you and you'd be better off not doing it. I took LSD, and, for years, I've been asked the question "If you could take it back, the good and the bad, would you do it again?" and I don't know the answer to that because I'm in a profession where it's probably good that I did it. But I would say on average that it's probably bad for people to do that sort of thing. And I wouldn't do it now for a million dollars.

Blue Sunshine plays as part of the Alamo Drafthouse Downtown's High for the Holidays on Monday, Dec. 27, 7pm. For more information, call 476-1320 or take a trip to www.originalalamo.com.