The news is out there 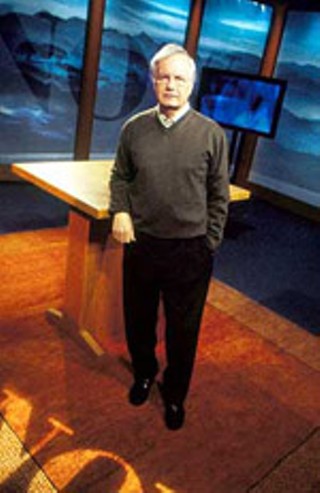 Amid much fanfare, NBC news anchor Tom Brokaw retired earlier this month, with Dan Rather of CBS announcing he will do the same early next year. Prior to all this, ABC's Barbara Walters went into semiretirement after a weeklong shower of hearts and flowers on her daytime talk show, The View, and an entertainment special. It will be interesting to see what kind of send-off Ted Koppel receives. His late night news program, Nightline (ABC), has suffered from lack of viewers, and it is reportedly on its way off the air, also early next year.

I have to admit that I was not impressed with Moyers until Now. Though his previous "deep-think" projects on subjects from mythology to modern dance struck me as interesting and well-informed, they often lapsed into navel-gazing. But my perspective has changed over time, and times have changed in a big way. I would have never guessed that Moyers would be the host of one of the last, if not the only, place in free broadcast television that offers a thoughtful, multilayered look at the pressing issues of the day. And while Brancaccio is a suitable replacement, I can't help but wonder: Is this the end of an era? If a door is closing, doesn't the proverbial window open somewhere else? If so, will it be a breeze or a stench that wafts through?

For those who have long given up on TV news, the answer is obvious.

"We don't have a vigilant, independent press whose interest is the American people," says Moyers in an AP article by Frazier Moore published on Dec. 9, and reportedly in his parting words in his last episode. "I think my peers in commercial television are talented and devoted journalists, but they've chosen to work in a corporate mainstream that trims their talent to fit the corporate nature of American Life."

But working outside of commercial networks is not free of challenges. Federal funding for public TV and radio has been a favorite target by overzealous legislators who seek to limit content on the public airwaves. So, while 70-year-old Moyers leaves the air for a well-deserved retirement (he's off to write a book), it comes at a time when public TV and radio sit on shaky ground, and alternative views on mainstream news sources are invisible. It stinks, but that doesn't mean there aren't other windows to open.

"We have got to nurture the spirit of independent journalism in this country," says Moyers later in Moore's article. And the spirit is there: online, in print, and even on TV. In addition to Now, Amy Goodman's Democracy Now! on cable access Channel 16 provides a much-needed alternative voice. But it's one thing to watch and listen. It's another to "nurture" independent journalism. What does that mean to you?

I think Moyers would appreciate your taking some time to think about that.

"The Soup Peddler": When David Ansel found himself wondering how to make ends meet, he found inspiration in the slow-food movement and started a soup subscription service called Savory Soul Sustenance. However, most of Ansel's customers now know him simply as the Soup Peddler, also the title of Lisa Kaselak's documentary. Ansel is a warm subject, and Kaselak's short film is a pleasant tutorial to learn about the slow-food movement, which encourages familiarity with local food sources to create a responsible relationship to nature and a meaningful approach to sustenance. "The Soup Peddler" airs Dec. 19 at 5pm.

Girl Wrestler: Thanks to the adoption of Title IX in 1972, Tara Neal and other young women began participating in sports once relegated to boys. But that didn't mean Neal's goal to become a national wrestling champion was not paved with potholes. Complaints that women's sports diminish boys' sports, general discomfort about girls wrestling boys, and Neal's personal dilemmas as a growing teenager, are all brought together in Austin filmmaker Diane Zander's Girl Wrestler, airing Dec. 21 at 12:30am.