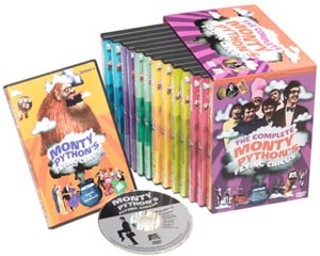 And now for something completely familiar. Return with us to those halcyon days when you were 11 and alienated your peers via regularly unscheduled in-school performances of "The Ministry of Silly Walks," "The Spanish Inquisition" (nobody expects it, you see), and, god help you, "Spam, Spam, Spammity-Spam." The 16 discs include all 45 episodes of the groundbreaking British comedy troupe's Dada-on-crumpets comedy, even the not-all-that-funny ones. Miraculously, it's all aged very well, like a fine Pinot Noir, or a potty bit of Stilton, and John Cleese, Michael Palin, Terry Jones, Terry Gilliam, Eric Idle, and the late Graham Chapman's finest hour(s) remain as captivatingly absurd as they were when they first aired in 1970-1974. This box set adds a wealth of extras to the mix, including unseen animations by Terry Gilliam, a glossary of Pythonisms, gobbets of info on the lads themselves, and, of course, "Useless Tidbits." No exploding penguin on top of your telly, sadly, but still and all enough Pythonalia to make you a social pariah all over again, as you launch into "The Lumberjack Song" whilst everybody else at the water cooler is discussing the finer points of Ricky Gervais in The Office. Sod 'em!