In the reality of life, war is hell, but in the nonreality of video games, war is a hell of a lot of fun. Witness the gun-toting, grenade-tossing, testosterone-spurting Master Chief, a cybernetic soldier woven from the genetic strands of Gen. George S. Patton and Dirty Harry. As the Master Chief and chief protagonist of the fiery first-person shooter Halo 2, players transform horrific violence into a giggly funfest of the Itchy and Scratchy kind. Squeeze your sweaty palms around the controls of Halo 2's M808B Scorpion MBT battle tank and chew meticulously rendered scenery like a Spielberg T-Rex. Or, if covert is more your bag, then exhale a cool breath as you depress an elegant round from a gas-operated sniper rifle into an alien temple. A long evolution from Space Invaders, Halo 2 is sure to invade endless stocking space this X-mas. Toys for boys this is, but toys for tots, this is not. That said, parents should strongly heed the "mature" rating of this bloodied space race adventure epic, as the game rewards violence and destruction like an honor roll report card. Destructive behavior is what fuels the battles here, and the voice-talent surprises that urge you on through the thickest of fights grows all the sweeter with such celebrities as David Cross, Orlando Jones, and Ron Perlman easing a comedic, hard-boiled edge into the jagged action. And with amped-up graphics, a whole new level of multiplayer support, the ability to dual-wield weapons, and a beefed up AI machine, Halo 2 offers a heaping transfusion of nourishment to an action-adventure game rack previously running on vapors. 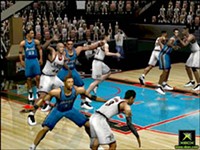