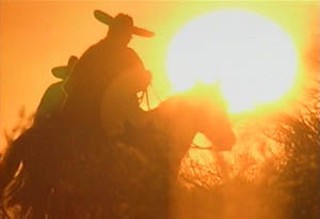 It was a bad year to be Hispanic in Texas' Rio Grande Valley: In 1915, a series of escalating border-area skirmishes between the Texas Rangers and Mexican cattle and horse rustlers, revolutionaries, and innocents led to the deaths of an estimated 5,000 Latinos, many of whom were killed outright with zero provocation and even less justification, their bodies left to rot in the open as a warning to others.

Kirby Warnock's documentary "Border Bandits" examines this thoroughly whitewashed era in Texas history through the eyes and voice of his late grandfather Roland Warnock, who witnessed the murder of two unarmed Hispanic men, 68-year-old Jesus Bazan and Antonio Longoria, by a group of Texas Rangers on Sept. 30, 1915. The men were shot in the back and left where they fell. Warnock's grandfather later buried the men and recounted the grim tale to his grandson some 60 years later as part of Baylor University's oral history program.

"Anglo audiences are primarily just slack-jawed when they see the film," Warnock says. "They say, 'I grew up in Texas and I never heard this.' Then, when I show it to Hispanic audiences, they're pretty upset about it. People will stand up in the audience and say, 'My uncle was killed by the Rangers' or 'My grandfather was killed by the Rangers,' or they'll just be so outraged they're practically shaking. They get really angry about [it, but] they're glad the story's finally being told."

"Border Bandits," which illuminates a particularly heinous period in Texas history, is hardly anti-Ranger ("I've had several police officers tell me they didn't find one thing objectionable about the film," notes Warnock), but is instead an invaluable record of a hysterical, racist, and ultimately bloodthirsty version of the American West few willingly recall, replete with itchy trigger fingers, political corruption, and wasted lives.

"I'm not a crusading liberal," Warnock emphasizes. "I like guns, drive a Suburban, and drink beer. I came to this story the same way that most white redneck Texans would. At first I was kind of skeptical, too, but the more information I uncovered, the more I discovered my grandfather was telling the truth. When you're a kid, you believe what your grandparents say and you believe what you read in the history books. But there's nothing about this in the history books."