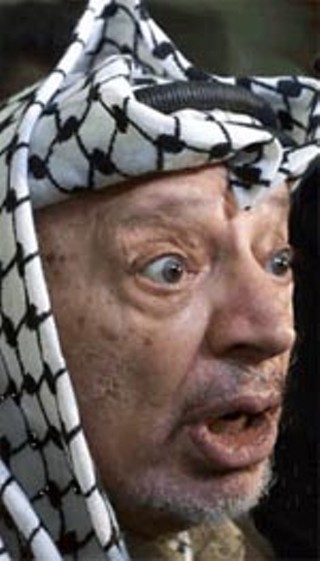 This is the time of year we take time to count our blessings and give thanks. There is someone I would like to thank this holiday season, as she won't be sitting at my Thanksgiving Day table. In fact, I don't know her name. She is the unnamed senior producer for CBS's overnight broadcast who dared to do something very, very brave – or very, very stupid, depending on your point of view. She was the producer who gave the green light to pre-empt prime-time programming to announce Yasser Arafat's death on Nov. 10.

Unlike Desperate Housewives actress Nicolette Sheridan's pre-Monday Night Football skit with Philadelphia Eagles wide receiver Terrell Owens (now dubbed "Towel Gate"), the senior producer's performance was presumably done fully clothed, and, I would hope, better than Sheridan and Owens. Towel Gate reportedly garnered numerous viewer complaints for its sexual suggestiveness (a towel-clad Sheridan drops her towel and jumps into Owens' arms) and more importantly, for being shown early in the evening, when thousands of impressionable children could watch and get the idea that sex and football are linked. Apparently those erectile dysfunction commercials, scantily clad cheerleaders, or the spectacle of thickly muscled, sweaty men violently pounding each other into submission are no cause for concern.

The unnamed senior producer's decision came during the last few minutes of the CBS drama CSI: NY. As is often the case, I had it on in the background while I was talking by phone with a friend in California when the CBS news bulletin came on my screen. I was shocked. Not because I didn't know Arafat's death was imminent, but that a mainstream news source broke in to share this news at all. To be honest, I was also heartened. After years of eschewing its role as the fourth estate – the role of which is to maintain a balanced and healthy skepticism – was CBS news getting its act together? Would the other network news sources follow suit? Would this simple but important gesture spark interest in people and events on the other side of the globe that, for as much as many refuse to accept even after 9/11 and the war in Iraq, might be worth knowing about?

Well, a news bulletin can only do so much.

I flipped through the broadcast channels, as did my friend in California. There was no news bulletin on her screen, though crawls began to appear on NBC and ABC.

As if the CBS news bulletin weren't unusual enough, something really strange followed the next day. CBS issued an apology. "An overly aggressive CBS News producer jumped the gun with a report that should have been offered to local stations for their late news. We sincerely regret the error," a Reuters news source reported.

It's an error to report a significant event in world news? Apparently so, if the news cuts into prime time, in this case, the last few minutes of CSI: NY, which draws 16.7 million viewers and ranks in the top 10 of all prime-time programming. "Grumbles from viewers and a number of CBS affiliates" (no advertisers?) expressed their displeasure at the move, according to a Broadcasting & Cable online article that ran the day after the bulletin aired. The same article also reported that the senior producer had been fired and that the pre-empted CSI: NY episode would be shown in its entirety Friday, Nov. 12. Well, that's a relief.

I don't know the details of this senior producer's firing. Maybe, in addition to her "overly aggressive" action, she was stealing paper clips from the supply closet. Maybe she parked in Dan Rather's parking space one too many times. Maybe her decision to cut in with news of Arafat's death was the final bit of information needed to complete the case for a firing a long time coming. We might never know. But we can all rest assured knowing that we will be well versed about Towel Gate, as well as the ongoing courtroom drama of this sports figure or that female pop star's love life, what movie made how much money, or any number of inane "news" stories that have no direct effect on our lives. But the death of a prominent, controversial leader in a troubled part of the world and its aftermath? That has fallen to the wayside faster than Sheridan's towel hit the floor.

So, thank you, unnamed female senior producer for doing your job. Thank you for daring to show, in one brief, ill-fated gesture, that the world is bigger than my living room. Unfortunately, it's not bigger than CSI: NY.