A butcher, a baker, a police officer, a newscaster, a phone-sex-operator mom, a dead-beat dad, and a cheat. Ray Carver and a confused audience. A Best Director nomination for Robert Altman. 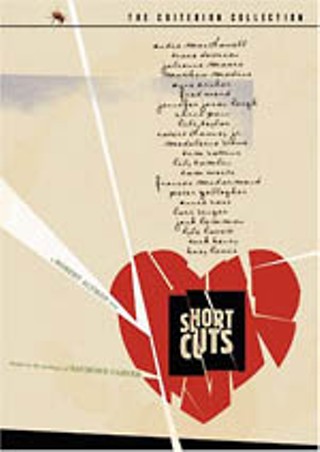 A butcher, a baker, a police officer, a newscaster, a phone-sex-operator mom, a dead-beat dad, and a cheat. Rub a dub dub, 22 men (and women) in a tub. Short Cuts' cast of normal misfits goes on poetically. Only, here, Lyle Lovett's the baker, and Altman puts him in a crowded, medfly-infested hot tub called Los Angeles.

Another in a string of Criterion Altman releases, Short Cuts is Altman's 1993 sketchy montage of the work of minimalist American short-story author Raymond Carver. While Carver sets most of his fiction in the Pacific Northwest, Altman's relocation to Southern California isn't such a bad idea.

L.A.'s a lot like Houston. It's sprawling and soulless. It may have the Lakers, but its freeways are numerous and desultory. Without a center, it's hard to feel connected to anything or anyone.

Short Cuts is hopeful though. Irony is hip on the West Coast. In Altman's lonely wasteland, people paradoxically affect each other, even if they don't realize it. It's the butterfly effect. One phone call can destroy somebody's world.

Where else can you see Alex Trebeck, Huey Lewis, and Tom Waits intersecting in one film? Where else do you get Lori Singer and Christopher Penn reunited for the first time since Footloose? And is there really a better married couple than Waits and Lily Tomlin? Altman puts the unlikeliest of people in the likeliest of situations and makes them mingle with subtle choreography. Randomness is his charm. Human behavior is what he studies – something confusing at its core.

But that's Altman's goal. A confused audience is an active one. With so many subplots, a viewer has to work hard to fill in what's missing.

Short Cuts' poster art depicts a loose, heart-shaped clump of broken pieces. Although the individual parts are shattered, they still comprise a sad, overall form. Altman gives you helicopters, fish, female scent, and jazz to help you make out this form, and he received a Best Director nomination for it. One of his chief additions to Carver is through supplemental musical characters functioning as bridges, including the troubled cellist played by Lori Singer – an impressive Juilliard-trained prodigy in real life.

Life is a throaty, tired blue note; it's a collaborative effort full of variations on a simple theme. The fact that Short Cuts is not a direct adaptation is rewarding rather than disappointing. Criterion's most useful extra is the inclusion of Short Cuts: Selected Stories, the 1993 paperback release of the 10 Carver works that inspired Altman. "I wasn't going to be pristine in my approach to Carver," says Altman in the book's forward. "Something new happened in the film, and maybe that's the truest form of respect."