The Geek Behind the GURPS

A conversation with Steve Jackson 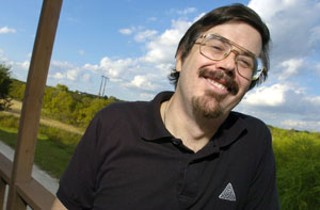 Steve Jackson founded his gaming company in 1980, but his self-created GURPS (Generic Universal RolePlaying System) and the paper and card games that went with it bore more resemblance to TSR's mid-Seventies runaway smash Dungeons & Dragons than it did to anything the Garriott brothers were doing at the time. Games like his Car Wars, Ogre, and Illuminati became something of an underground sensation – in their time they were almost as popular, game-wise, as Halo is now.

Since then, Jackson is working on creating a GURPS Online, but the company's most famous moment didn't come from the fans, but from the U.S. Secret Service, who raided SJG's South Austin offices on March 1, 1990. Using the pretext that SJGs might have been involved in illegal computer hacking (you can read Bruce Sterling's excellent account of the debacle in his book The Hacker Crackdown), the agents confiscated Jackson's computers, largely because they thought the company's GURPS Cyberpunk game was "a handbook for computer crime." Criminy! The case eventually went to court, and Jackson was rightly exonerated. But the echoes of that existentially bizarre moment in Austin gaming history still linger in the Electronic Frontier Foundation (www.eff.org), an online rights advocacy organization founded in the wake of the raid to monitor the then-nascent situation of federal abuses of power in monitoring online and computer-gaming situations. So, what's Steve Jackson up to these days?

Austin Chronicle: How have you seen the gaming industry change since you started out?

Steve Jackson: When I got into the gaming industry, it had nothing to do with computer games, which back then were this weird little thing that was happening on the sidelines. When I started the company, it was all role-playing; paper games, even card games weren't so big then, either. But they're a big part of my market now. I've been around long enough that the biggest change has been the arrival of computer games. And, of course, the division of the industry into the true computer game and the console game was another of these things that started off slow – initially console games were something that real gamers didn't take seriously and thought of as kid's stuff – and then there was this collective that's a game machine!

Is that still as prominent, that division? SJ: I don't know if I expect the line to continue to blur between dedicated game machines and the real computer. I don't know what to predict anymore. There's so much to be gained by dedicating a device, by specializing, that I think we're going to see more evolution of the dedicated device. The question is "Will storage and memory and connection all continue to become so cheap that there's no point in not putting it all on one box?" And we don't know that yet.

AC: How has this computer advent affected your company? Or has it?

SJ: For years and years and years, it didn't. It still hasn't affected it enough. We are actively working to get back into the computer side of things. We worked with Origin Systems many years ago and got a couple of good computer games out of that – Auto Duel, as well as the implementation of Car Wars, and Ogre. The Ogre release you could get on [the old computer] Commodore 64. We have done some deals since then, but for some reason or another, one of them has matured into something you could walk into a store and buy. That's all too common, and since we're a paper-game house primarily instead of a development house primarily, that means that when a publisher does something bad to us we say "Oh, shoot!" and go on and ship another 100,000 of the paper games, rather than going out of business. But it's still a drag.

AC: Was there a drop-off of any sort on your end when computer games surged forward, or are you as popular as ever? I mean, even the term "paper-gaming" seems kind of quaint at this stage.

SJ: We didn't see one, but it might be that our growth was slow. The received wisdom in the paper game business is that our biggest competitors now are not each other but the Gameboy Advance. Which may or not be true. I like doing paper games and I don't want to quit, I love doing computer games and I want to get more into it, and I want to keep on working on a fusion of the two. For the last few years, I've been reactive about it. When a computer game publisher gave a call, I'd take it and talk. We need to be proactive about it and define what a good partner is for us and go talk to them until we find one who thinks we're a good partner for them.

Don't Believe the Hype
Local Digiterati on the Good, the Bad, and the Internet in Between