Keepin' 'Em on the Farm 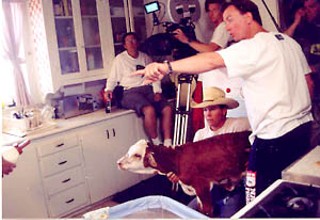 Barry Tubb on the set

Barry Tubb is a true Texas independent. The filmmaker has been doing it his way since ... well, let's say since the age of 15, when he won the state bull-riding championship (junior division) and decided to hang up his spurs for the lure of the greasepaint. Throughout the Eighties and Nineties, Tubb appeared onstage in New York and in several Hollywood films (among them Top Gun, Lonesome Dove, and the TV shows Bay City Blues and Hill Street Blues), as well as co-starred in a few scrappy independent films (Valentino Returns, Warm Summer Rain). He's still working as an actor, but these days the Snyder, Texas, native has turned his attention to directing as well.

This cowboy-turned-filmmaker has returned to his roots to make the G-rated family picture Grand Champion, which opens in theatres Friday, Oct. 15. The movie tells the story of a young Buddy (Jacob Fisher), who raises a prize-winning steer, only to realize belatedly that his four-footed best friend is to be auctioned off as grade-A prime, whereupon he nabs the animal and heads out on the lam. It's "Free Willy on land," Tubb enthusiastically explains, as if in a pitch meeting, or "Huck Finn on hooves." The writer/director also has a turn in the movie as the helpful veterinarian who befriends Buddy, and who Buddy hopes eventually will befriend his single mom (played by the tender but vivacious Joey Lauren Adams, best known for playing the title character in Kevin Smith's Chasing Amy).

In making his kids adventure movie, Tubb also got some help from a passel of friends. Grand Champion's cinematographer, Danny Moder, just happens to be the hubby of Julia Roberts, and the couple's talented niece Emma Roberts is one of the film's young co-stars. Roberts herself turns up for a charming cameo, as does Tubb pal Bruce Willis. "He finally wanted to be in something his children could see," speculates Tubb. Several country & western singers and rodeo stars also make guest appearances, including George Strait, the Dixie Chicks' Natalie Maines, Charlie Robison, Robert Earl Keen, Joe Ely, Jo Carol Pierce, Tuff Hedeman, and Larry Mahan. One might wonder: Who needs farm animals with friends like these?