Matt Stone and Trey Parker take on terrorism, celebrity, and the perils of puppetry 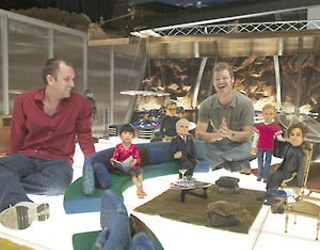 Trey Parker and Matt Stone are hitting the breakfast buffet hard. It's a Sunday morning in Toronto in early September, and they're here to conduct a day of interviews for their as-yet-unfinished film Team America: World Police. They flew in to the Toronto International Film Festival the night before, after working all week on the film's editing. Although principal photography is finished (mostly), there is still all the editing and the voice work to do before the movie's release on Oct. 15. Plus, there's that pesky NC-17 rating for the film's puppet sex, which they still need to tone down to an R.

Puppet sex? Team America finds the demented duo responsible for Comedy Central's cash cow South Park broadening their horizons beyond the crude animation/crude humor of their weekly TV show to this all-marionette feature film. Sure, they've made several other features and other TV projects – both live action and animated – all peppered with their signature combination of smutty juvenilia and barbed social commentary. But Team America is the first time they've done it with puppets, so to speak.

Going into the project, they had no idea that working with puppets was going to be so hard. They were inspired to make the movie after watching old episodes of Thunderbirds (a television show coincidentally remade this summer as a live-action movie starring Bill Paxton). Says Stone, "The Thunderbirds was so cool-looking, but the stories and the scripts were so boring and mediocre. The idea was: What if we did an R-rated, adult action version?" Parker adds, "About halfway into pre-production we were like, 'Oh, this is why nobody wants to do this.'" Making the movie involved working with sets and building everything to scale, along with "a level of advance planning we weren't used to," adds Parker. Stone explains, "We're used to being able to say, 'Oh, I know, let's do this.' And then, that minute we can do it. Here if we say, 'Let's have the Chinese army show up,' it would take a month to get ready for it."

How did they hit on the idea of making their puppet film a Bruckheimer-style disaster movie about catching terrorists and skewering celebrity? "It was about two years ago, and there was nothing bigger going on than this story of what it was like to be an American," says Parker. "Hopefully, we tried to make a story that's not about this side and that side. I think there are political overtones, but it's more about the feelings that certain political events have. It never came from a place of 'Look, we need to say this and we need to make this point.' It was just us making fun of everyone else's point, without having one of our own."