'Cowards Bend the Knee': an autobiography of an original in all senses

Tweet
print
write a letter
Canadian filmmaker Guy Maddin is one of the most original filmmakers residing in North America these days, if not the world. His films, including the new, autobiographical Cowards Bend the Knee, combine stark black-and-white, small-gauge photography with both the stylistic and acting tropes of the silent film (jittery camerawork, jarring editing, and manic pacing) and a penchant for truly bizarre storylines to create an entirely new – but decidedly pre-Hayes Code – form of cinema, one that feels both dreamily familiar and shockingly outr/. The Chronicle spoke to him by phone from Toronto, where he's currently taking a break from producing three back-to-back productions and teaching a class on melodrama at the University of Toronto.

Austin Chronicle: What's the background on Cowards Bend the Knee? Didn't it have its origin as an art installation?

Guy Maddin: Yeah, the Power Plant art gallery in Toronto approached me about doing an installation for their gallery. I worked with them and we agreed that I would do a series of 10 peepholes in the wall behind which would be these little films. I'd been sort of a naughty little boy and had spent many years drilling holes in walls and staring at people, so I thought I would return the favor and balance the books a little bit by filming my autobiography (or at least its most lurid moments) and letting people peep back in at me.

I had a lot of patience as a young voyeur and could spend hours at a peephole, but those peepholes were sort of built for my personal comfort. These peepholes proved to be difficult because there was a weird climatic condition inside the Power Plant gallery which resulted in a blast of air shooting out of each peephole, so it was sort of an eyeball dehydrating experience looking at these things. Plus, the music didn't synchronize up as it should have. So, I felt that by some fluke, even though I was making an episodic series of glimpses at my life, that I'd somehow made the most coherent narrative of my career. I thought it was kind of a shame that no one would ever see it properly, so I begged the Power Plant to allow me to show it as a single-channel movie, and now, after only four of five gallery visits, it's begun its life as a movie.

AC: When you call it an autobiography, can you explain what you mean? I'm assuming you don't exist in a drop of semen beneath a microscope as the character bearing your name does in the movie.

GM: I've always used my own life experiences – as most people probably do – as a litmus test for whether something a character does, even in a fantasy or a science fiction film, has at least the basic motives behind an action seem psychologically plausible. But I went considerably further than that in this film. I took certain episodes, or things that felt exactly literal episodes in my life, and just cranked them up enough so that they would feel the same way (I hoped) to the viewer as they felt for me as I lived them. Some people say art is reduction, some people say art is exaggeration, but to convey the same feelings that you experience in real life, you have to mutate them somehow in order to fit them into a 90-minute feature length movie. And usually that means compressing a plot until there's outrageous coincidences and hyperbolic actions.

With my love of melodrama, I prefer to see melodrama not as an exaggeration of real life but as life lived uninhibitedly, the way we dream. You're not allowed to hit people or actually touch people you lust after on the street in waking life, but in your dreams you can do so without hurting a soul. And that's sort of a true reflection of the self, what you're feeling in your dreams. So it's in your dream life that you live an uninhibited existence and that's sort of what melodrama allows us to do: to view life uninhibited. I just thought I'd give my autobiography an uninhibited version of itself, so if I felt like strangling somebody I allowed myself to do it. It is kind of a truer portrait of what I did than what I really did. It's an autobiography of my feelings.

AC: Virtually all of your films are based on the proposition that silent films are perhaps superior in some way to the modern sound film, and they reflect that conceit in many, many ways. How old were you when you first discovered the silents, and what reaction did they engender in you?

GM: There's probably two ways to come at silent film and be incredibly affected by it. One would be to be raised with it from the cradle, sort of the Wayne Gretzky way, with skates laced on instead of baby booties. The other way is to come at it as an adult, and I sort of discovered the silents as a 24-year-old. I hadn't really watched any movies up until then, kind of like Paul Schrader. When I was that age I started hanging out with people that really pleased me with their approach toward movies. They saw movies as having all the rights of all the other plastic arts, the right to as hyperbolic or as not, or as silent, or mimed, just not literally earthbound to being so-called realistic. They saw them as having the same freedoms to be as multilingual as painting or poetry or anything. And that was kind of exciting to me. So I started watching some silent movies, notably some von Stroheim pictures and Buñuel's first two movies, which are mostly silent. I was just excited by how it actually seemed like these were things an unskilled – but maybe clever – person could make himself. You didn't need to be technically proficient to make the Buñuel pictures – they were, after all, his first two and he was using just friends as actors and things like that, and yet, he was still conveying exciting, hilarious, universal truths. That kind of primativity is great for conveying all the primal emotions, like jealousy and the ones that I found myself steeped in at the time, anyway. I was a pretty hotheaded young man, and when I saw this Spaniard's film up there boiling at about the same temperature I was, I was quite excited by it and instantly wanted to make my own.

AC: How long did it take to shoot Cowards Bend the Knee?

GM: Five days. But they were pretty easy days – we sort of started at eleven each morning and finished by four in the afternoon. I just picked up a Super 8 camera and for the first time I didn't even use storyboards or anything.

AC: Did you have a script?

GM: I did have something that I'd written, because the Power Plant demanded a catalog and they wanted the script to be the catalog, but I sort of only followed it from memory. And because it was an autobiography, I would just assemble the complete cast every day and just begin filming. Sometimes I would change my mind halfway through a shot and I would just whip the camera around to someone else. So everyone sort of had to be mumbling their way through my life at all times so I could just capture the moments. There's a lot more camera movement in this movie than in any of my other films.

AC: Did you edit manually or did you use a computer program?

GM: Normally I edit manually, but this was done on Media 100 because I wanted to try a new facsimile for memory. I wanted to present the film as a memory, but since it's impossible to present memories literally on-screen, I tried this new trick. The way we remember, of course, is we skim back over the past like a rock skipping across the surface of the water, touching on a few memories but skipping most of the filler in between. And then when you finally arrive at that to-be-savored memory, you all of the sudden become like a DJ scratching the needle back and forth over that memory so that you wring every single drop of flavor from it, and then you move on. And every now and then you remember things out of order. So I decided to try and edit the film that way, which necessitated the use of a computer because it allows for a certain spontaneity. You just kind of take your mouse and whip it across the pad in a fast-forwarding motion and it produces one-of-a-kind versions of a fast-forward of your film because it skips in a different place each time you try it. I kept adding more and more of these scrolling movements and then slowed them down when they arrived on something that looked kind of neat to me, something that looked worth fetishizing. 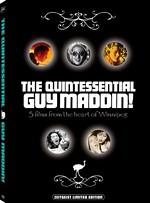