Michael Almereyda on 'This So-Called Disaster'

When Michael Almereyda directed legendary playwright/actor Sam Shepard in his contemporized 2000 version of Hamlet (as Hamlet's father's ghost), he had no idea that his next project would be a fly-on-the-wall documentary about the birth of Shepard's play The Late Henry Moss, featuring heavyweights Sean Penn, Nick Nolte, James Gammon, and Woody Harrelson. At once an intimate portrait of Shepard's creative process as well as an almost therapeutic examination of the playwright's tumultuous relationship with his own dead father, the finished film is unlike any other documentary on stagecraft. The Chronicle spoke to Almereyda on the eve of the film's Austin premiere and discussed the evolution of the documentary and his love for Pixelvision cameras.

Austin Chronicle: Is this your initial foray into documentary filmmaking?

Michael Almereyda: Actually it's not, although the first is kind of obscure. It's called At Sundance [1995] and was done at the Sundance Film Festival as a way for me to defend myself against the confusion and chaos of the festival. I interview every movie director that I could get into my hotel room – Rick Linklater, Atom Egoyan, Todd Haines, Gregg Araki, Abel Ferrara, Danny Boyle, Lee Tamahori. ... It was the 100th anniversary of the invention of cinema, and I just asked them if they were optimistic or pessimistic about the future of movies. It was funded by the now-defunct Shooting Gallery and shot entirely on Pixelvision. I'm really proud of it.

AC: This is a good time to ask about your ongoing fascination with the Fisher Price Pixelvision camera, which you've also used in Nadja and Hamlet.

MA: It was one of the few cameras I could operate completely by myself. 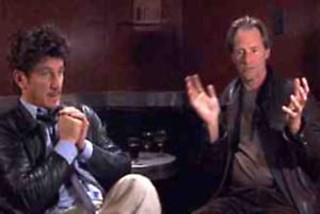 Sean Penn and Sam Shepard in This So-Called Disaster

AC: On to This So-Called Disaster. How did the film come about?

MA: Sam [Shepard] called me up and said he was directing a new play and that he had a great cast and he wondered if I was interested in making a record of it. He instigated the process. It was pretty impossible to say no. And he hadn't even seen Hamlet yet. I don't really know any documentaries like it. Most movies like this tend to be pretty self-congratulatory, and I cut everything like that out. It wasn't an ad for their nobility, it was more an attempt to show what goes on on an intimate level when people of this stature get together.

AC: How many hours of footage did you end up with?

MA: One-hundred and forty. So the editing was a big challenge, and in many ways the editing shaped the movie more than might be apparent, because I wanted a kind of artless or casual style. But really it's a very crafted movie.

AC: Did this experience make you want to try your hand at the stage?

MA: Not really. Given a choice between sitting in a theatre and a classical stage theatre, I'll jump at the movie theatre.

This So-Called Disaster will screen at the Alamo Drafthouse Downtown (409 Colorado) Sept. 28-30, 7pm. Michael Almereyda will be in attendance to present each screening. For more information, call 476-1320 or visit www.drafthouse.com.