Wright, Pegg, and Frost on Romantic Zomedy 'Shaun of the Dead'

In these salad days of the reanimated zombie genre, who'd have thought that the best of the lot would be the romantic comedy? Anybody remember My Boyfriend's Back? But the very British, very smart "zom-rom-com" Shaun of the Dead eats all comers for breakfast, doing more with a pub than the Dawn of the Dead remake could even imagine with its mall, while getting more humanistic and satirical mileage out of one ending than 28 Days Later could with two. And Shaun's zombies are the slow kind.

Moving from what they call the "suburban action" of their hilarious, comic-book-inflected TV series Spaced, to this "residential evil" on the big screen, the Shaun of the Dead team has achieved "critical geek mass," with kudos from Peter Jackson, a hat-waving ovation from Robert Rodriguez, and the enthusiastic blessing of the man himself, George Romero. In town for an explosively geeked-out, only-in-Austin sneak preview at the Alamo, Simon Pegg (star, co-writer), Edgar Wright (director, co-writer), and Nick Frost (co-star) sat down to talk zombies in their possibly haunted suite at the Driskill.

Austin Chronicle: It's obvious from the film you're fans, so for you guys, what makes a perfect zombie movie?

Simon Pegg: If there's a perfect zombie movie, it's probably the Dawn of the Dead original. There's a lot of great humor in that film, a lot of tragedy, and a sweet little satire on consumerism. So we wanted our film to be almost a bonus edition to Romero's trilogy, as if Night, Dawn, and Day were going on in Pittsburgh, and this is what happened in the UK, where you get a little bit different breed of slightly repressed, rather quaint, cricket-bat wielding zombie killers.

Edgar Wright: We decided to do something that started off as a very sweet-natured romantic comedy, and it just happens that it gets gate-crashed by a zombie film. Zombies were pretty much killed off by Michael Jackson's Thriller video ... so we thought we'd play the zombie element straight and show how these characters' reactions aren't a million miles from what you or I might do in that situation. Like if you saw a zombie in the back garden, you'd maybe think she was just some girl who was really drunk or on Ecstasy or –

SP: That's the last thing you'd think about. That would be your last port of call that she's a zombie. The idea was to see how people who live in quite ordinary, mundane settings deal with massive things happening to them. Like Shaun really misses everything at first: He can go to get a candy bar, Coke, and ice cream and come back without noticing that there are 20 zombies in the street staggering toward him. But we all do things like that – like Edgar missed the huge agricultural disease, foot and mouth, that's been a real problem in England. He was so wrapped up in his own work and stuff that when he caught the news one night, the first thing that he actually saw about that was a pile of burning cows.

EW: I had to get the CliffsNotes on foot and mouth straightaway. It was really embarrassing.

SP: Or like Nick and I, the night that [Princess] Diana was killed in Paris –

EW: So even though the world is ending, he still goes to the shops, he still goes around to [his girlfriend] Liz's, he still delivers flowers to his mum, he ends up in his neighborhood bar, you know?

SP: Life kind of doesn't change. And yet it does dramatically. Because he does his usual thing, but by the end of it, he's a different man ... or is he?

AC: Kind of kidding the screenwriting convention that someone can fix a life in three acts, like checking off a to-do list on a refrigerator.

SP: Right. It takes something as drastic as zombies to enable him to do it. It's sort of a catalyst. The only way anyone can sort his life out that quickly is to be pursued by a legion of the undead.

Shaun of the Dead opens in Austin on Friday, Sept. 24. For a review and showtimes, see Film listings. 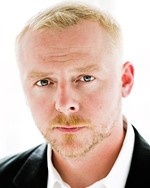 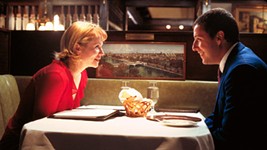