Buggin' out at IMAX

Celebratory habits of the Austin arthropodophile 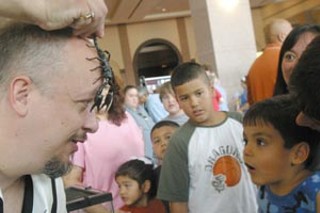 The baked beetle larvae crunched like hollow pretzels between my teeth.

"They have a kind of nutty flavor!" enthused the guy who was offering a small plate of the larvae (waxworms, they're called) to the crowd of kids and parents gathered around the Insect Delicacies table outside the Texas State History Museum. "And they're loaded with protein!"

It was almost 1 o'clock in the afternoon of Saturday, Sept. 11, 2004, and the sun was trying to turn us all into baked larvae. Kids and grownups – of which there were twice as many of the former – were crowded four or five deep along the Delicacies table's front. "But maybe y'all want something a little sweeter," said Mr. Enthusiasm, and began passing out plastic soufflé cups filled with lemon Jell-O and crickets.

I was with my daughter; she was munching a waxworm and nodding her head in a "not too bad" sort of way. We like bugs, generally, though this was the first time we'd eaten them.

The movie had been terrific, providing a close-up, virtually three-dimensional view of exotic arthropods living in a South American rainforest. Of course, any 3-D movie of IMAX proportions is a mindblower, but this one was especially well done, with a voiceover by Dame Judi Dench, and only mild personification of the lead bugs: a butterfly (née caterpillar) and a praying mantis (not too cloying, this gambit, and likely appreciated by the younger kids).

After the movie we'd stepped into the museum's downstairs rotunda and smack into Bug Central. There were cages and tanks full of giant millipedes, butterflies, dung beetles, scorpions, tarantulas, water bugs, and other such crawlies displayed and explained by the likes of UT's Entomological Society and David Moellendorf of Austin Arachnological Services. A very friendly guy named Barrett Anthony Klein had a large, eclectic collection of insect-related artwork and documents and postage stamps for viewing. People milled around the rotunda, gawking and yakking, then made their way from the air-conditioning to the other exhibits in the heat outside.

A sort of tent stood beneath the big Texas star in front of the museum, filled with people watching Madagascar Hissing Cockroaches race each other through tiny Lucite hallways. The museum's star was partially covered by a giant inflatable spider. And beyond the star and its faux spider: cricket-spitting.

There's an official world record to be had, it seems, for whoever can spit a cricket the farthest. And out at the museum that Saturday, you could get a dead cricket from a guy who was walking around with a large baggie full of chilled ones; you could put that cold cricket in your mouth, stand at the line where the Official Measuring begins, and expel the bug from between your lips with all the force you could muster.

My own performance was less than notable.

The variety of activities provided by the Bob Bullock Texas State History Museum for the premiere of their newest movie, however, was not. And though they took place for only one day – well, there's still the World's Largest Cootie Tournament to come in October – Bugs! 3D: A Rainforest Adventure continues at the museum's IMAX theatre through Oct. 31.

In addition to Bugs! 3D, the Bob Bullock Texas State History Museum will host a Bug B-Movie Festival in its Spirit Theatre. The series – complete with special effects – will be hosted by Prof. Griffin of Prof. Griffin's Midnight Shadow Show and will run from Wednesday, Sept. 22, through Friday, Sept. 24. Tickets – $8 for one night's activities, $22 for a three-night pass – are available at the museum or at 936-4649.

Wednesday, Sept. 22: Empire of the Ants and Them

Thursday, Sept. 23: The Fly and Return of the Fly