The nostalgia of myth 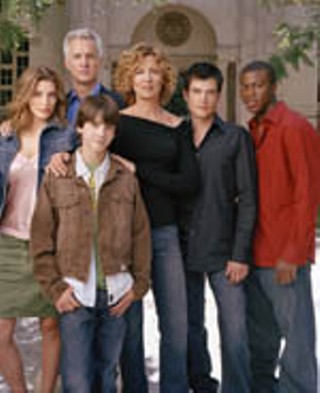 When I was a little kid, we learned the story about George Washington cutting down the cherry tree. Do they teach that story anymore? The story about our nation's first president as a youngster who did something wrong but confessed to his deed and took his licks was not really a history lesson, but a lesson on character. Inherent in the story was the question: What kind of character, experience, and choices does it take to become a leader? This question, to a large extent, is what fuels one of the most promising new fall series, Jack & Bobby.

It's clear the series is not banking on the cultural shorthand those two names evoke. But this is not a veiled story of the Kennedy brothers (John F. and Robert). It is the story of the McCallister brothers and their mother, a university professor and single parent raising two bright but divergently different teenage sons in the fictional college town of Hart, Mo. What the audience knows – and what the McCallisters don't know – is that in 2041 one of the brothers will be president of the United States.

The series cleverly treats the future as the present. Several individuals – presidential advisers, the first lady, a campaign manager – address the camera as if taking part in a documentary on the life and career of President McCallister. Flashbacks to the past (our present) show us the family and social dynamics of the tight-knit yet troubled family. A small lie has become myth and, finally, accepted as fact. The consequences of maintaining the lie prove costly. But the McCallisters don't know this. This is what draws viewers in, the lingering question of when and why the truth will reveal itself, in addition to the question of how small events impact the future in unimaginable ways.

Christine Lahti as Jack and Bobby's mother, Grace McCallister, is superb. Strong-willed, opinionated, and slightly unconventional, Lahti plays a larger-than-life character with, well, grace. Thankfully, Grace has humanizing flaws, making her likable in spite of herself. This is a role that Lahti can sink her teeth into, and she does so with relish.

Newcomer Matthew Long plays Jack, the eldest of the two brothers. Handsome, athletic, and socially confident, he is exasperated with his mother and annoyed with his brother's social awkwardness. Logan Lerman's (The Butterfly Effect) Bobby is an endearing dweeb. A smart, sickly (he's asthmatic), passionately optimistic blabbermouth, he can only watch his brother as he maneuvers high school's invisible landmines. In spite of Bobby's knack for being underfoot at the wrong time, Jack takes his role as big brother seriously.

Others in the cast include John Slattery as the new college president Grace finds herself repulsed by and attracted to. Jessica Paré is his teenage daughter, Courtney, who becomes friends with the McCallister boys. Jack's relationship with his best friend, Marcus Ride (Edwin Hodge), is as tight as it is conflicted. Marcus is one of the few characters who can speak of the McCallisters from lifelong experience, making his point of view highly charged and valuable.

The pilot teases viewers, not revealing until the end which of the two brothers will be president. I almost wish it had remained a secret longer into the season. But no matter. The premise of the series is so provocative, Lahti is so buoyant, and the experience, albeit a fictional one, of watching a young man maturing into a leader wins in a landslide.

Jack & Bobby premieres on Sunday at 8pm on the WB.

On the Sundance Channel

Unprecedented: The 2000 Presidential Election examines events leading up to the most contested presidential election in U.S. history. Airs Sept. 11, 14, and 20 at various times. Check local listings.

Shooting the War. A look at contemporary photojournalists working in the world's turbulent hotspots. Airs Sept. 20 at 8pm.

Persons of Interest. Following 9/11, the Justice Department rounded up thousands of "suspicious" Arab and Muslim immigrants, many of whom are still in custody today. This film gives a human face to several detainees and their families, offering a sobering critique of the U.S. anti-terrorism campaign. Airs Sept. 27 at 8pm.