The must-get gets it 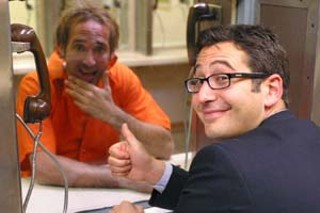 Avid TV watchers are perusing their favorite entertainment industry sources to determine which of the new prime-time series to watch. Each new and returning series is the result of months, even years, of work: pitching, deal-making, writing, filming, casting, and promoting. Most viewers are oblivious to all this. Pilot Season, the first original series to air on Trio, dives headfirst into this charged miasma of competing egos and carnivorous dealmakers eager to snag the "big get" and delivers scathing comedy that is almost as frightening as it is hilarious.

While there are several high-profile films about the underbelly of television – Network being the most enduring – there are few memorable TV films or series dealing with the subject. The trials of writers working for the temperamental Alan Brady (Carl Reiner) were only half the source of laughs on The Dick Van Dyke Show. More recently, The Larry Sanders Show and Sports Night offered behind-the-scenes glimpses of off-camera life, but these were decidedly character-driven series. If memory serves, it's not until Action (1999, Fox) that a series with an insider perspective bearing fangs appears. In this short-lived series (occasionally rerun on FX), Jay Mohr starred as Peter Dragon, a studio executive clawing his way back to the top after making a much-publicized multimillion-dollar flop. Compared to Mohr's caustic, opportunistic Dragon, Alan Brady was a cupcake.

Pilot Season has a lighter touch. Filmed as a mockumentary, the series follows several loosely related characters during the competitive 120 days of pilot season, the period starting in January when pilots are bought and sold and actors are hired, hopefully for a series that will find a place in a network's prime-time schedule. The series is set up as a follow-up to a student film, Who's the Caboose? (an actual 1997 independent film, starring many Pilot Season actors, also scheduled to air next week). Pilot Season picks up eight years later to find out what became of Susan (Sarah Silverman), a New York actress who tried her luck in L.A. during the aforementioned pilot season, and her then boyfriend Max (Sam Seder, Pilot Season co-writer, director, and star). When Pilot Season begins, Susan is doing well, thanks to her new boyfriend, a successful TV actor and producer. Feeling sorry for Max, Susan negotiates a job for Max at Big Management, the agency that represents her. Unfortunately, Max stinks as a manager, but that doesn't stop him from pursuing Russ Chockley (Ross Brockley), a "must-get" talent who's turned his back on L.A. and taken up farming in Lincoln, Neb. (As a Lincoln native, I can attest that the Lincoln locations are authentic, right down to establishing shots at Duffy's Tavern.) In spite of his incompetence, Max manages to lure Russ back to Hollywood. Unfortunately, Russ has no interest in TV and even less interest in sobriety.

The semiscripted series is masterfully played by several well-seasoned improvisational actors: Andy Dick (Less Than Perfect), David Cross (Arrested Development), H. Jon Benjamin (Dr. Katz, Professional Therapist), David Waterman (Eight Legged Freaks), Brockley (a former comedian, now a chicken farmer in Lincoln, Neb.), and Isla Fisher (Scooby-Doo). Several real-world TV executives appear as themselves, as well as several fact-imitating-fiction incidents. Just because the lead actor of a TV series unexpectedly dies doesn't mean the series has to end, Susan's boyfriend explains in a later episode. As a "tribute" to the actor, the series was reworked, the cast augmented, and the show went on. Sound like a former ABC sitcom, does it?

As the reluctant star, Brockley nails it. Presumably, he gets his Hollywood weariness from his real-life experience as the "Holiday Inn Slacker." As the star of the hotel chain's most successful ad campaign, Brockley was Hollywood's "it" man for a season. (In Pilot Season, Brockley's Russ starred in Motel 10 commercials.) Afterward, Brockley turned down a slew of movies and TV series, including Dude, Where's My Car? and According to Jim, the latter presumably informing his deadpan, "kill me now" reaction to being pitched one lame domestic comedy series after the next.

The starry-eyed and optimistic should avoid Pilot Season like bad shellfish, spoiled milk, and comestibles designed for the ironclad stomach. For those who like their comedy spiked, raw, and still kicking, it's wickedly delicious.

Pilot Season premieres Monday, Sept. 6, at 8pm on Trio. Two half-hour episodes will air back to back. Trio reprises its Brilliant but Cancelled series preceding Pilot Season. Who's the Caboose?, the film the series takes its cue from, will have its world premiere on Trio Sunday, Sept. 5, at 8pm. Check local listings for details.