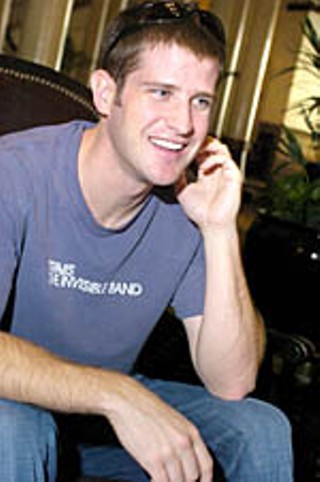 "It's important to me to clear up the misconceptions," 29-year-old filmmaker Richard Kelly explains, "because I don't want [viewers] to think this is a film about an evil rabbit – because the rabbit isn't evil – and I don't want them to think this is a film about a kid who's crazy and taking a bunch of drugs – because he's not crazy at all, he's been given placebos."

To the uninitiated, all this talk about rabbits, evil or otherwise, might sound cryptic to say the least, but to the legions of fans who latched onto Kelly's 2001 film, Donnie Darko, it makes perfect sense – maybe the only truly sensical thing about Kelly's bewildering but addictive film debut.

A defiantly unmarketable hybrid of sci-fi, religious allegory, and Eighties nostalgia, Donnie Darko came and went from theatres in the blink of an eye, the casualty of a post-9/11 landscape that wasn't eager to embrace a film that hinges on an errant jet engine crashing into the bedroom of the teenage Donnie Darko (played by Jake Gyllenhaal, prepinup days). But the movie found new legs – and that legion of devotees – through midnight screenings, DVD sales, and a buzz that just wouldn't go away. (The not-evil rabbit, by the way, shows up to deliver news to Donnie of the coming apocalypse.)

Three years later, Kelly – who is now in preproduction on his second film, Southland Tales, after many frustrating false starts – has assembled a director's cut, what he likes to call an "extended remix." He insists this version isn't intended to replace the theatrical cut – "it's not like I'm having the negatives burned to oblivion" – but the director's cut does come closest to his original vision of the film, before the distributor demanded a shorter cut.

"It was taken away from me, and things were changed against my will," recalls Kelly, in Austin for a special screening of the film. "I did what I could to hold onto my original intent, and the theatrical cut has great integrity, but I wanted people to see and experience the full assembly of all the elements that were in place."

Those elements include greater exploration – and explanation – of the film's chief themes of time travel and predestination, as well as much tweaking of the soundtrack. He knows, however, that the changes might to some feel like a betrayal, because Darko fans are so personally, sometimes rabidly, invested in the film.

Any flak aside, Kelly hopes to score in the re-release a mainstream audience for his cult-favorite film, knowing that box office numbers – not critical acclaim or a devoted fan base – too often control a filmmaker's future prospects.

"I haven't made a movie in over three years, and there's a reason why," he smiles ruefully. "It's as hard as it has ever been to get these kinds of films made."