Breaking bread on the air 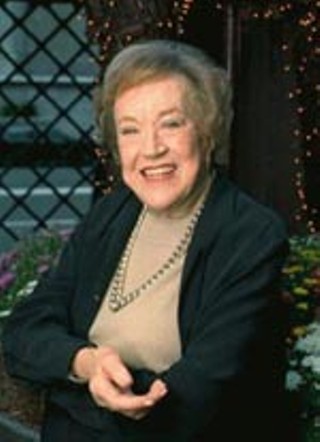 Julia Child, the legendary TV chef, died last week in her sleep, leaving legions of fans saddened. One thing she didn't do was leave us hungry. As the longtime host-chef of The French Chef (PBS), Julia & Jacques Cooking at Home, and the author of several cookbooks, Child made elegant dining and cooking as accessible as her refreshing demeanor. I first remember watching her as a girl with my mother, who didn't seem so interested in learning Julia's recipes and techniques as much as she enjoyed having Julia around. She was the comadre whose drop-in visits were always welcome.

My favorite Julia moments occurred when she teamed with French chef Jacques Pépin for Julia & Jacques Cooking at Home. Pépin clearly admired Julia but was not beyond challenging her techniques or calling her choices into question (and vice versa). One of my favorite Julia & Jacques episodes had the two of them tackling the hamburger. Both had their nuances, but the one thing they shared was a deep, carnivorous pleasure taking that first bite of their burgers, grilled to perfection. I laughed out loud as grease leaked from the corner of Julia's mouth, as she was barely able to speak. How could you not love her for that?

Ay, Julia. Gone, but not forgotten. As long as there are meals to be prepared you will always be in our culinary hearts.

One of my favorite Saturday afternoon pastimes is watching cooking shows on PBS and on the Food Network. I'm no judge of who is the best of the best. All I know is who seems genuine, whose work seems as attainable as Julia's. While Chronicle Food Editor Virginia B. Wood must have her own studied list of chefs apparent to Julia, I offer this list of contenders from a lay perspective.

Rachael Ray, the host of two shows on the Food Network, $40 a Day and 30 Minute Meals. On the former, Ray shows that eating on the road (typically in vacation spots in the U.S. and abroad) doesn't have to mean subsisting on a pauper's stash of cheese and crackers. With a little planning and ingenuity, a tourist can eat like a queen. In 30 Minute Meals, Ray proves that making fabulous meals does not require high-end gadgetry or gourmet ingredients. See www.foodnetwork.com for show times.

Lidia Bastianich, host of Lidia's Italian American Kitchen (Saturdays at 2:30pm on PBS). Let me say this: Lidia throws down! Her dishes gleam and glisten, and when she takes a taste of her creation in viewers' stead, I'm flushed with jealousy.

Pépin without daughter Claudine. His daughter apparently knows wine, but ask her to chop an onion and she's useless. I like Pépin best when he shows us basic techniques, like his awesome way of deboning a chicken. In a cooking special he did with Julia, she playfully challenged him by dropping a 13-pound turkey on the cutting board. He deboned the large bird flawlessly.

Rick Bayless. For a white boy who grew up in Oklahoma, Bayless has a deep affection for Mexican cuisine. His show Mexico: One Plate at a Time (Saturdays at 1:30pm on PBS) travels from his Chicago-based kitchen to the streets, restaurants, beaches, and jungles of Mexico, where no dish or method is considered too rasquache. His episode on the variations on mole made me weep.

Ming Tsai, host of Simply Ming (Saturdays at 1pm on PBS). I can't tell if his food kicks, but he sure is sweet to watch.