The season's most anticipated games

Tweet
print
write a letter
Tap your ruby-red sneakers together and repeat: There's no place like home computers to escape the humdrum reality of life. Nobody knows this truism better than the engineers who grease the reactor of America's gaming mother ship: a massive industry behemoth, that plies its tractor-beam hold upon pimply faced teens and twentysomethings alike, sucking cash and free time out of the gamer human like the bloodied pockets of a drive-by victim. Gone is the yellow brick road of Konami's Frogger leaping innocently across Main Street, replaced now with visions of stolen hoopties crashing through intersections, sniper rifles picking off aliens, and magical spears impaling monsters. Such is the state of the nation's game universe, a Venus flytrap baited with sex, drugs, and Rockstar Games. Yet unlike its cousin film industry, which draws most heavily upon the teats of summer cash cows, the game biz milks its nourishment year round, an infinity engine of summer, spring, and fall blockbusters alike. In these coming months, sequels to ghosts in the machines past will offer bigger quests, deadlier guns, and ramped sex allure within the most perfectly forged fantasies ever conceived. So steady your nerves. Steady your opposable thumb. Adventure is coming to a computer screen near you.* 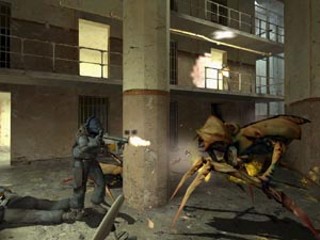 Guns. Strategy. Conundrums. All mixed into a "save the world" plot. Call it the thinking man's shooter. This sure to be wildly popular successor to Half-Life offers a sequel in line with the intellectual gamers' desire to evolve above the "smash and bash" Cro-Magnon-style play of the Doom-generation breed. Set in a future time from the original Half-Life in a fictional European-type setting called City 17, it's your job as hero Gordon Freeman to save the planet from alien infestation. Okay, that premise is hardly original when judged against the pantheon of industry history, but with Valve's newly built Source engine pumping polys at eye-popping resolutions, this continuation to 1998's multimagazine Game of the Year winner may actually live up to its hype. Or at least to the hype of Half-Life 2's new facial animation engine, which sports 40 distinct muscle reactions to define emotional expression light years beyond simple Devo-style head jerks. Also, much like the original, Half-Life 2 will be split into 12 in-game chapters, which are then subdivided into shorter episodes, yielding even longer in-game play than its originator. And don't forget support for up to a 32-person multiplayer mode. Yes, it may be time to cash in some of those sick days you've been hoarding. 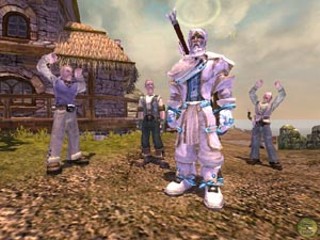 Although this achingly too-long-in-development role-playing game from famed fantasy genre developer Peter Molyneux promises to revolutionize the action-adventure sect, Fable's delayed germination has prompted Big Blue Box to give up on some of its promised features. Still, from Internet rumors, fact, fiction, developer interviews, and undeniable E3 demos, a heavenly buzz has begun to erupt around this RPG that it might very well at least cause a primitive revolution. Starting as a young child hero who witnesses the massacre of his family and village, in Fable, you will grow, develop physically, choose paths of good or evil, and interact with the world around you in a way that no other game has offered in history. Your actions will cause direct impact upon the land of Albion. If you terrorize a village one week and return another, the inhabitants will remember your misdeeds and run in fear or perhaps attack you. But even more intriguing is the direct impact your play style will have on your character appearance: Fighting with sword and force will yield a bulking frame, whereas, a path of magic causes your skin to grow pale and age your body into an old wizardly frame. Despite the lack of a promised multiplayer option, Fable still holds a great deal of hope for gamers who enjoy an open-ended adventure through a world of fantasy ripe for saving maidens, amassing loot, and slaying the most formidable creatures spawned from the bowels of developer hell.

This fourth installment to the violence- promoting, community-standards-busting, stereotype-reinforcing GTA series conjures up a fictional California county named San Andreas as the backdrop for what will undoubtedly amount to a surreal trip through the fabric of a startling visceral American urban experience. For those familiar with this series' previous incarnations, GTA: San Andreas should not disappoint, with more high-octane car screeching, punked out street fights, sexual flirtations, and the general busting up of multiple streets and deserving heads. As with its predecessors, story is less vital in GTA than action, but nevertheless, Rockstar Games has dutifully constructed the drama anyway – here we find protagonist Carl Johnson surviving the murder of his mother and disintegration of his family only to be set up for a homicide wrap by a couple of dirty men in blue. Yep, you guessed it, this game will not receive a Newt Gingrich seal of approval. Of course, Grand Theft Auto was never dropped into gear for the starched-collar crowd, so parents should be wary of impressionable youngsters immersed in the bloodied playground of this in-your-face ride.

This much-anticipated sequel to Xbox's flagship title and critically acclaimed third-person shooter piles on more polys to drop the jaw of even the most tight-mouthed critic. In the continuing saga of the kill-every-alien-that-moves story, players are once again thrust behind the mask of the Master Chief, an ego-toting, gun-blazing über marine set out to thwart a full-on invasion of Earth by a destructive species of aliens known as the Covenant. Equipped with a myriad of rifles, guns, grenades, rocket launchers, and the roughest, toughest 4-wheel-drive vehicle ever equipped with an automatic machine gun, the original Halo took young soldiers into a place that only Dirty Harry might have dared. As the sequel newly takes full advantage of Xbox Live's multiplayer functionality, Halo 2 promises the ability to wield new dual guns, customize armor, and stomp the gas on new-fangled vehicles, all of which will be rendered under a next generation of graphics, sound effects, and music.

Rightly deserving of the slang title "Evercrack," this insanely addictive massive-multiplayer online game original sent mortgages into default, marriages into divorce court, and inflated the value of a gaming hour to the monthly haul of a South African diamond mine. Let it be said as warning to all: Everquest II should only be installed on your computer with the full knowledge that its druglike addictive world could very well rip apart the normally civilized fabric of your soul. For the uninitiated, stepping into the sword-and-sandal role-playing Everquest II universe will be something akin to falling down a rabbit hole or walking through your bedroom mirror into a mystical parallel universe. So real are the graphics. So textured is the landscape. This is a fantasy land that could easily replace your reality like an Asimovian clone without you the wiser. From the ability to own real estate (yes, you can finally afford a home), to customizable characters within 16 races, 24 classes, and 50 levels, the world of EQ2 offers up a stunning 160 unique monster types to fight, featuring everything from a lowly orc to a 5-story, fire-breathing dragon. Come November, the pipe will glow anew and high adventure will smoke out new heroes. Do you dare fan the flames?*Ship dates subject to change.