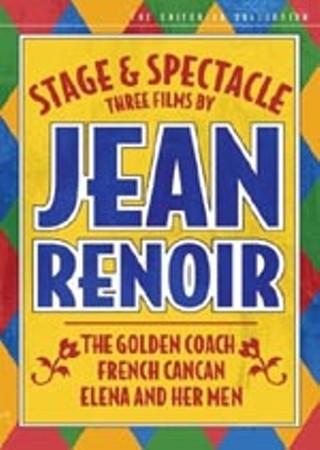 Toward the conclusion of Stage & Spectacle's supplemental BBC documentary – part two; the first half is on Criterion's exceptional The Rules of the Game double disc – Jean Renoir comes to the end of his life (1979), and upon reviewing his oeuvre, discovers his father's hand in everything he did. That the writer-director had pursued the exact opposite almost all his life bears relation to the fact that he was well-known for occasionally taking one of Pierre Auguste Renoir's paintings off his wall and selling it to finance one of his films. Whatever the case, papa's palette is definitely on display in Renoir's Technicolor trilogy. By 1951, when he returned to Europe, the Jean Renoir of Grand Illusion and La Bête Humaine was another casualty of World War II. In Italy, he made The Golden Coach ('53), with Roman screen empress Anna Magnani playing an 18th-century acting troupe matriarch wreaking havoc on a Spanish colony in Central America. Mostly it resembles a Bob Hope costumer of the period (Monsieur Beaucaire?), but it's better than the trifle of Elena and Her Men ('56). A vehicle for Renoir's friend Ingrid Bergman, Elena began as a parade for famed French General Boulanger (Jean Marais), but did an abrupt about-face when the luminous Swedish actress came aboard. In his introduction to the film, Renoir admits this didn't "help me make a very good movie." The real spectacle here is 1955's delightful French Cancan, starring Renoir's beau ideal Jean Gabin as the man who built Paris' windmill cabaret, Le Moulin Rouge. Like Singing in the Rain, Cancan is a showbiz flick, canny, clever, but unlike An American in Paris, its City of Lights isn't Westernized, as it was Renoir's first French film since The Rules of the Game. No American features of the period have the luxury of Cancan's sexual frankness. Even within such a carefree framework, Renoir's understanding of human nature deserves to hang in the Louvre.

The Lower Depths (Criterion): Like Hemingway's The Killers, dueling versions of Maxim Gorky's flophouse farce are packaged as one, but separated by decades and directors. Jean Renoir and Akira Kurosawa cast their respective alter egos, Jean Gabin and Toshiro Mifune, in complementary interpretations with starkly contrasting conclusions.

Mamma Roma (Criterion): Pier Paolo Pasolini preferred using nonactors, yet after his unforgettable debut Accattone, the Italian visionary cast fellow powerhouse Anna Magnani as a prostitute who waits 16 long years to bring her son to live with her in Rome. Almost as gritty as Accattone, whose Franco Citti co-stars, its second disc features a sardonic Pasolini short in which Orson Welles is a film director making The Passion of Jesus.

Port of Shadows (Criterion): Marcel Carné's foggy notion about an army deserter in a town without pity. Not his best, but Jean Gabin meets his fate with dignity. 1938.